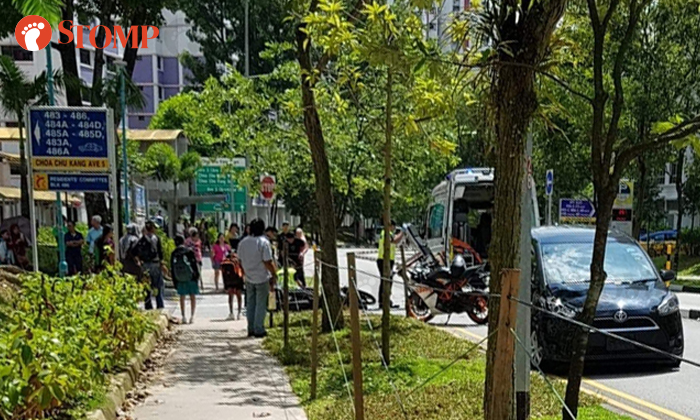 Two men were taken to hospital after an accident involving two cars and a motorcycle along Choa Chu Kang Avenue 5 on Thursday afternoon (July 5).

Stomper Maria contributed a photo that she received from a WhatsApp group chat, showing a crowd gathered around a motorcycle that was lying on the road.

In response to a Stomp query, the police said they were alerted to the accident at 1.28pm.

The 42-year-old car driver and the 40-year-old motorcyclist were both conscious when conveyed to Ng Teng Fong General Hospital and National University Hospital respectively.

According to Stomper Maria, the accident occurred along the "same road where a bus knocked down a small boy in May."

In that incident on May 24, a six-year-old boy died after he was knocked by a bus and pinned underneath one of its tyres along Choa Chu Kang Avenue 5.

The victim, Ashvin, had been with his pregnant mother when the fatal accident occurred.

Related Stories
UPDATE: 6-year-old boy dies after getting trapped under bus in Choa Chu Kang
Boy killed in CCK accident had dashed out in front of bus when crossing road with pregnant mum
Motorcyclist trapped under car after accident at Kitchener Rd saved by passers-by
More About:
car
motorcycle
biker
accident