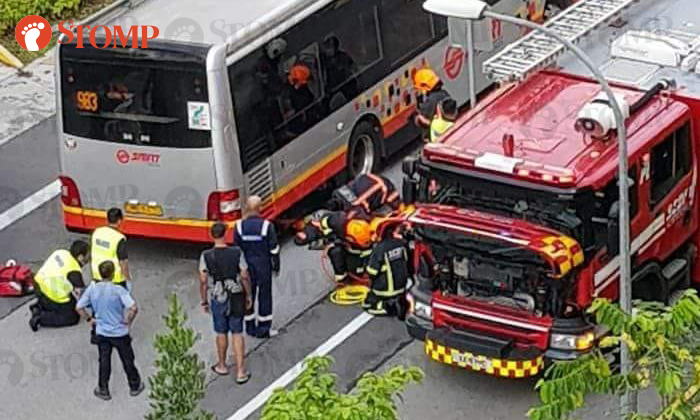 A six-year-old boy who died after being knocked down by a bus along Choa Chu Kang Avenue 5 on Thursday (May 24) is believed to have been crossing the road with his mother when he suddenly dashed ahead of her.

The victim, known as Ashvin, sustained multiple serious injuries after getting trapped under the rear tyre of the SMRT service 983 bus and died in the National University Hospital (NUH).

Police told Stomp that the 57-year-old bus driver was assisting with investigations.

According to Lianhe Zaobao, Ashvin had allegedly dashed across the road while his mother was busy adjusting her grip on him, his scooter, and some groceries.

He was then struck by the bus.

Ashvin's mother, who is four months pregnant, was reportedly taking him to a tuition class with another parent and her daughter when the accident occurred.

She was grief-stricken by the accident and had to be taken to NUH after fainting, said Zaobao.

The mother and son lived in Chennai, India.

As he was having his school holidays, Ashvin's mother had brought him to Singapore to visit his father, a permanent resident working here. They were originally scheduled to return home on Wednesday.

Ashvin's father, whose profession is unknown, had moved into a rental flat near the accident site a few months ago.

A small group of relatives and friends arrived at the Singapore General Hospital mortuary on Friday afternoon (May 25) at around 12.30pm to collect Ashvin's body and have it embalmed before sending it back to India.

They were in a sombre mood and declined to speak to the media.

Ashvin's body was flown back to Chennai in a flight departing Changi Airport in the evening, while his parents left on an earlier flight at 2pm.