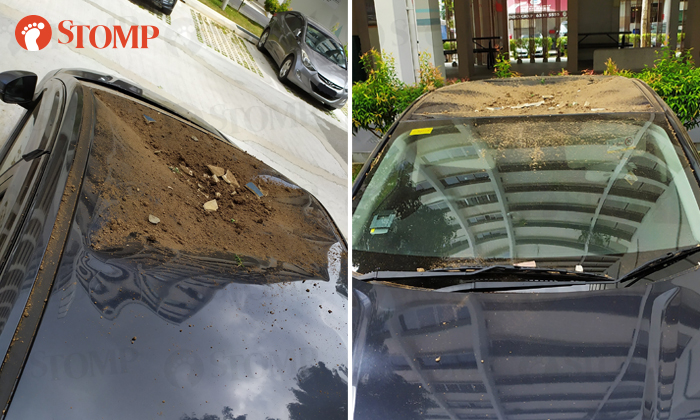 Stomper Anonymous was dismayed to find his car damaged by a flower pot that had fallen on its roof at the carpark of Block 526 Hougang Avenue 6.

He alerted the police about the incident on Sunday (Feb 9), at around 10.25am, and is appealing for any witnesses to share more information about what happened.

Photos that Anonymous shared with Stomp show soil and shards from the flower pot on the car's roof and front windscreen. The roof also appeared to be dented.

Anonymous said: "The damage is extensive as you can see.

"The distance between the HDB block and the carpark is also quite a few meters away, with the walkway and grass patch in between. Therefore, it cannot be a case of the flower pot accidentally falling or being blown by wind.

"I believe someone deliberately threw it down, but I'm not sure if it was aimed at my car or at other cars or simply thrown at random.

According to Anonymous, he and his family have to go without the car for two weeks as its interior is damaged too.

"It is very concerning especially in this current virus situation," he added.

"If the culprit cannot be found, I will have to bear the insurance and my premium will go up next year. My No Claims Discount will be reduced too.

"Some of my neighbours said the incident occurred at around 1.30am on Sunday as they had heard a loud bang but did not know what caused it until later in the morning.

"I just hope someone might have seen the actual incident and can provide more information to the police."