Everyone has probably had their fair share of unpleasant customer service experiences and most of the time, we just shrug it off.

But when Stomper Ary received a rude email from a Car Club employee, she was in complete disbelief and knew she could not take it lying down.

Ary told Stomp that she booked a car from Car Club, which is a car-sharing service provider in Singapore, on Dec 18.

"When I picked the car up, I did all the necessary checks and was about to drive off by pushing the handbrake down but I realised I could not push the little button on the handbrake," Ary shared.

"I tried everything: I used both hands and all my strength but I just couldn't push the button down.

"So I called Car Club, told them about the issue and followed their instructions on how to fix it.

"Even after they gave me instructions, the handbrake still couldn't be pushed down."

Ary added that after trying many times, she saw a man, who was also a Car Club user, nearby and decided to ask him for help.

"He wiggled the handbrake, used his strength and finally, he managed to push it down after struggling a bit," Ary said.

"But before the man came to help me, I actually emailed Car Club to tell them about my issue."

This was when the insults came her way.

In a shocking reply, the Car Club employee called her feedback an "embarrassing complaint".

He then proceeded to say that Car Club would have to "revise (her) membership" as she "apparently did not pass (her) driving test".

The employee did not hold back on the negative remarks and asked Ary to "use a little bit of (her) bimbo brain".

He went on to ask her to email his director if she was unhappy with the arrangements.

He added that he is a "high GPA Polytechnic graduate" and "will be quitting this stupid position soon".

The icing on the cake came when he concluded with the remark: "P.S. I am much good looking and have a hotter body than you."

You can read the full email here: 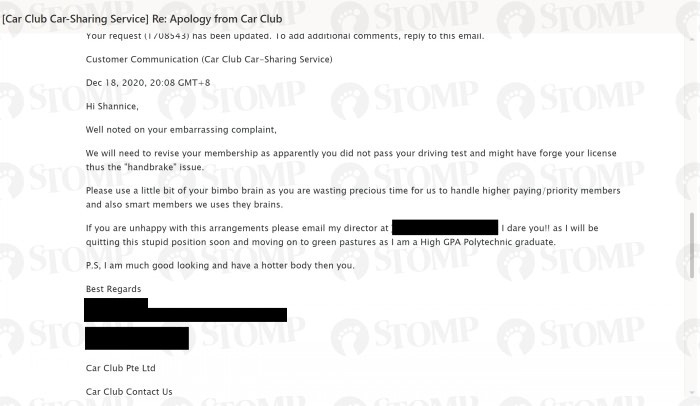 Ary told Stomp that she managed to keep her cool and replied to the employee, explaining her situation.

(Screenshot of Ary's reponse to the Car Club employee)

"After the incident, I told the Car Club management about it. But there was no explanation and no apology from anyone in their senior management with regards to what happened," Ary said.

"I don't think I was rude to him at all. The message that he sent me was totally uncalled for.

"If he didn't want to reply, that's fine. But why such a reply? If you hate working for the company, that's fine too. But there's no reason to say such things."

Apparently, Ary was not the only victim of these insults.

She saw on Facebook that other customers had received rude emails from the same Car Club employee too.

"Looks like I'm not the only one who was affected by this. Others received nasty emails as well," she said.

In response to a Stomp query, a spokesman from Car Club said that they do not condone such remarks and are disappointed about what happened.

"This is very uncharacteristic of our service standards. We have already investigated the matter and it was an ex-contract employee who was brought in to help us during the peak session who caused this mischief," added the spokesman.

"He breached customer service standards maliciously and has been dealt with. We have already contacted those that have been affected. We also offered them our apologies as well as the necessary restitution for this unpleasant experience that was a result of mischief."

The Car Club spokesman said that they have concluded their investigations of this matter and will be exploring legal avenues for further actions.

"We have also counselled our affected staff and will step up any support for them for this unpleasant experience," added the spokesman.