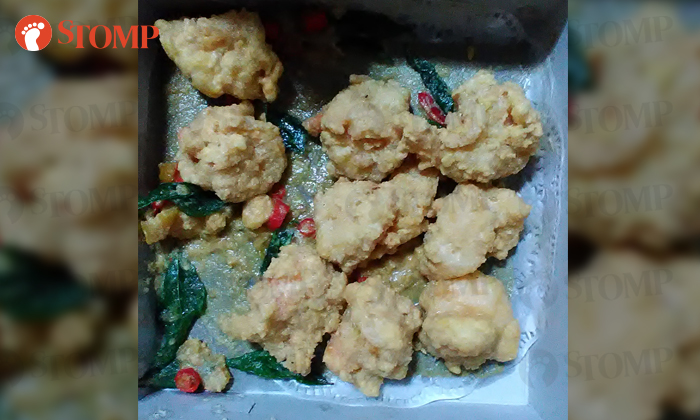 Stomper Alvin was left unimpressed after paying $22 for prawns balls from a zichar stall at Block 505 Canberra Link at around 7pm yesterday (Nov 30).

He felt that the dish was overpriced, especially considering its quantity and quality.

Alvin, who also purchased other main and side dishes from the same stall for his family, said: "When I got home, I was surprised by how the salted egg prawn balls, which I paid $22 for, came in only nine pieces in the box.

"They had little salted egg on it. I think it's super overpriced because this means that per piece = roughly $2.50!?

"I went back to the stall and asked how they charged or calculated -- pieces or grams -- for the salted egg prawns.

"I even showed her the photos I took. There was more flour than salted egg. The salted egg doesn't really have much taste. And the prawns weren't even big.

"$2.50 per piece? I can pay the same price for a pack of chicken rice with additional meat."

Alvin also shared with Stomp a photo of the dish, which he said was taken immediately after opening the box and before anyone had eaten it.

Another picture that he contributed shows a list of dishes that he ordered from the stall, with the prawn balls being priced at $22.

Related Stories
$20 'sha pi ji' from Tampines kopitiam turns out to be 'miserable pieces of chicken skin'
Woman charged $6 for packet of "all bones" at duck rice stall in Jurong East
Woman receives food delivery that spectacularly fails to live up to expectations
More About:
food
expensive food
expensive