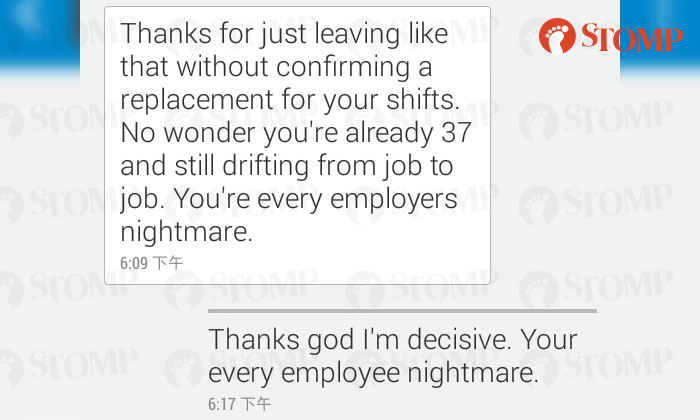 A local cafe and a potential employee exchanged unfriendly texts over the phone following a dispute over work shifts.

In a telephone interview, Stomper JY, the potential employee, said that she had first come across an opening for a cafe assistant online on Sep 24. According to her, the salary advertised was $1,800 a month.

She then went down for an interview two days later.

There, JY said she was told that her pay will be $5 an hour for the first 80 hours of work and $9 an hour after that.

She decided to take up the job and was given an online link to express her interest in the days and hours of work. She indicated on the document that she wanted to work from Monday to Friday.

When she got the final roster, however, JY told Stomp that she was eventually scheduled to work for two morning shifts in a week.

Being 37 years old, the Stomper said that it was not financially prudent for her to take up the job. Moreover, she had also found another job as a cashier.

JY reported that she then sent a WhatsApp to the hirer to withdraw her interest in the job.

At that time, she had also been added into a WhatsApp group chat for employees of the cafe.

After deciding not to take the job, she asked in the chat if anyone was free to cover her shift.

She received a reply, but JY did not respond.

She subsequently left the group chat as she thought that she had no obligation to the company and that it was 'inappropriate' for her to be involved in its workflow.

Following her exit from the group, JY received a private text from her hirer asking if she had found a replacement to cover her. She did not reply.

After that, she received another text that chided her for actions. This time, however, JY said she did not know who the sender was, but believed that it was someone from the cafe.

Read the text: "Thanks for just leaving like that without confirming a replacement for your shifts. No wonder you're already 37 and still drifting from job to job.

"You're every employers nightmare."

JY then replied: "Thanks god I'm decisive. Your every employee nightmare."

Related Stories
Man hurls vulgarities and points middle fingers at guy during dispute at Punggol MRT Station
Passenger repeatedly tries to pay for $19 car ride in rupees -- despite driver telling him it's not accepted
What's going on here? Cabby and Grab driver hurl vulgarities at each other
More About:
dispute
text
company
worker
employer
no-show
work