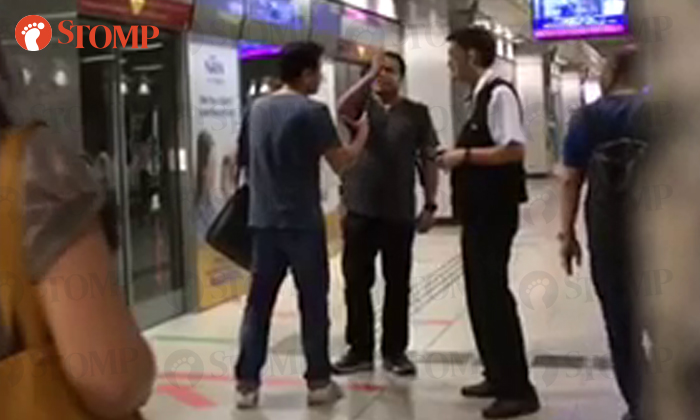 An argument broke out between two men at Punggol MRT Station after one apparently bumped into the other while they were on an escalator.

Stomper Nicholas contributed a video of the dispute, which he witnessed at 1.41pm yesterday (Sep 29).

In the video, the two men can be seen giving their sides of the story to a third guy, who is presumably an employee at the train station.

One of the men involved in the dispute also hurled vulgarities and twice pointed both his middle fingers at the other party.

Based on their conversation, the quarrel appeared to have started after Backpack Guy bumped into Slingbag Guy while on an escalator.

Backpack Guy had apparently walked down the escalator, but said he wouldn't have banged into Slingbag Guy if the latter had not been standing in the middle of the escalator, instead of at the side.

"Now he's not happy, now he wants me to follow him, " Backpack Guy told the employee.