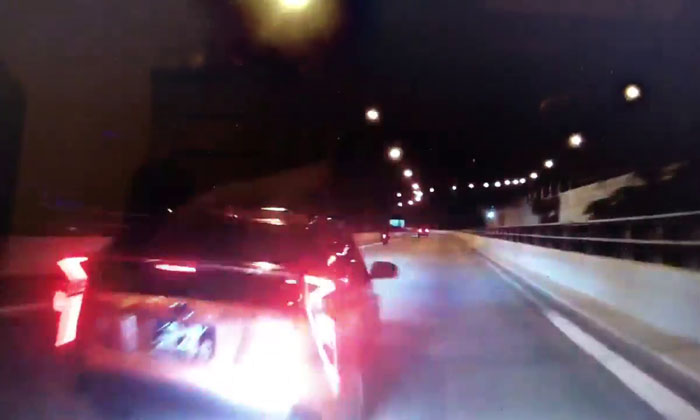 A taxi driver was seen dangerously swerving in front of another vehicle on the Tampines Expressway (TPE) after the other driver sounded his horn at him on Aug 30.

A Facebook user posted a video of the incident that was recorded on his in-car camera on his Facebook page.

He told Stomp that he was driving in the first lane along the TPE towards Changi Airport at about 4.22am when a Prime Taxi cab cut into his lane from the third lane.

"I applied my emergency brake and sounded my horn at him before he moved to the second lane," he said.

"When I overtook him, the taxi driver looked at me and pointed his middle finger.

"I proceeded to drive off but the taxi overtook me and abruptly changed to my lane and applied his brakes.

"This action almost caused me to have an accident if I had not braked in time."

He added in his post that the cabby could have stayed in the second lane as he was only going at about 40 to 50kmh.

The Facebook user said the taxi driver followed him to Changi Airport where he dropped off his passenger.

"I could see there was no passenger in his taxi.

"I saw the driver take a photo of my vehicle.

"After I approached an Aetos officer and told him about it, I drove off and the cabby stopped following me."