Cabby cuts into driver's lane, jams on brakes then stops taxi in the middle of expressway 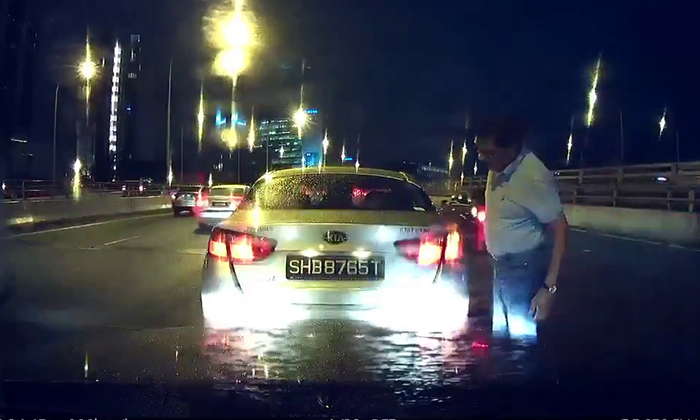 A cabby was filmed cutting into a driver's lane, jamming on its brakes and then stopping in the middle of an expressway.

Stomper Allen shared a video of the incident that was published on Facebook page SG Road Vigilante.

According to the timestamp in the video, the incident occurred at about 7.24pm on Tuesday (Oct 22).

The video, which has no sound, shows a Silvercab cutting into the lane on its right and jamming its brakes right after entering the lane.

The cabby drives forward, stops in the middle of the road and exits the taxi.

The cabby can be seen looking at the back of the taxi as if he was checking for damages.

He then looks right at the camera, returns to his taxi and drives off while attempting to switch to another lane on his right.

Related Stories
Why did these 2 cars suddenly jam on brakes, causing driver to collide with one of them?
Toyota driver gets honked at for 'dreaming' at traffic junction, responds by playing braking game
Audi driver cuts into Stomper's lane without signalling and plays braking game before speeding off
More About:
taxi
inconsiderate
inconsiderate driver
braking game
brake