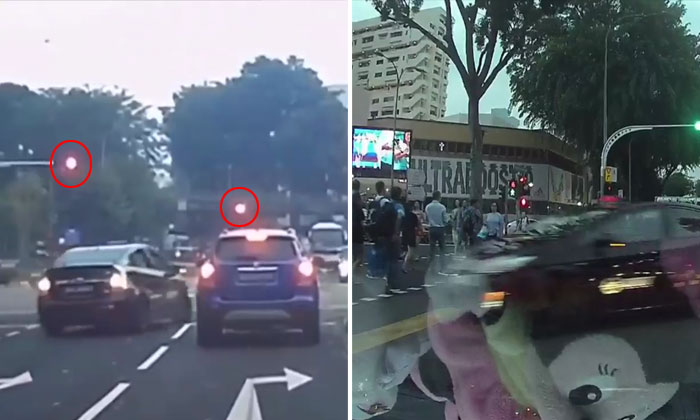 Three people were injured when an SMRT taxi driver beat a red light and ploughed into pedestrians at the junction of Jalan Bukit Merah and Alexandra Road on Friday evening (Mar 22).

One of the pedestrians, a 66-year-old woman, succumbed to her injuries after she was taken to National University Hospital.

According to the police, the 72-year-old cabby had allegedly lost consciousness prior to the accident.

SMRT told Stomp that its immediate priority is the well being of the injured pedestrians and that it is cooperating with the police in their investigations into the accident.

Several Stompers alerted Stomp to videos of the incident.

A video compilation was posted on SG Road Vigilante's Facebook page, including footage from three different in-car cameras and photos of paramedics attending to a woman who was injured in the accident.

The 66 years old woman succumbed to her injuries after she was taken to National University Hospital....

In the video, the driver of the taxi is seen turning on his hazard lights before abruptly cutting into the left lane from the rightmost lane before beating the red light and making a right turn.

He dashes through oncoming traffic before ploughing into pedestrians crossing the junction and comes to a stop after hitting a kerb.

In response to a Stomp media query, Ms Margaret Teo, VP for SMRT Corporate Communications provided the following response to the accident:

"At about 7pm on Friday, an SMRT taxi was involved in an accident at the junction of Alexandra Road, Queensway and Jalan Bukit Merah.

"Three pedestrians were injured as a result.

"Our immediate priority is the well being of the injured and our care team is trying to get in touch with them and their families to render assistance and support.

"Meanwhile, we are extending our full cooperation to the Police in their investigations into the accident."

The police told Stomp that they were alerted to the accident at about 7.04pm.

"The taxi driver, a 72-year-old man, and two female pedestrians, aged 32 and 66, were conveyed to National University Hospital where the 66-year-old female pedestrian subsequently succumbed to her injuries," a police spokesman said.

"Preliminary investigations revealed that the taxi driver had lost consciousness prior to the accident.

"He is currently assisting in Police investigations."