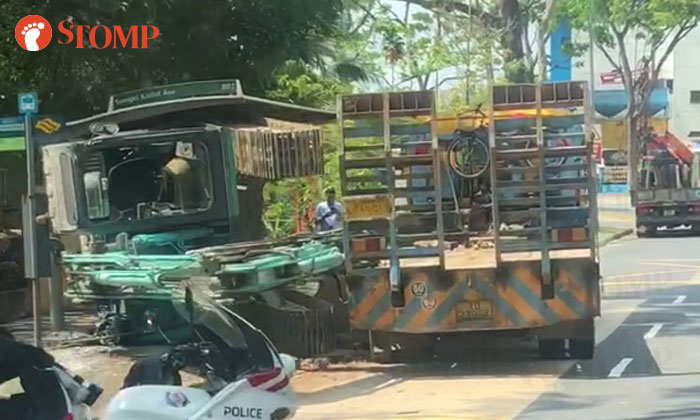 An excavator toppled from a prime mover at a bus stop along Sungei Kadut Avenue on Wednesday morning (Mar 20).

The 64-year-old driver of the prime mover is assisting with police investigations.

Stomper Lim alerted Stomp to the incident and shared photos and videos he took as he was passing the scene.

In Lim's video, the green excavator can be seen lying on its side at the bus stop while the prime mover remains stationary beside it.

Fortunately, no one was injured.

"It seems that even standing or waiting at a bus stop can be unsafe as something like this can happen," said the Stomper.

In response to a Stomp media query, the police said they were alerted to an incident where an excavator was dislodged from a prime mover along Sungei Kadut Avenue.

"No one was injured in the incident," a spokesman said.

"The driver, a 64-year-old man, is currently assisting with police investigations."