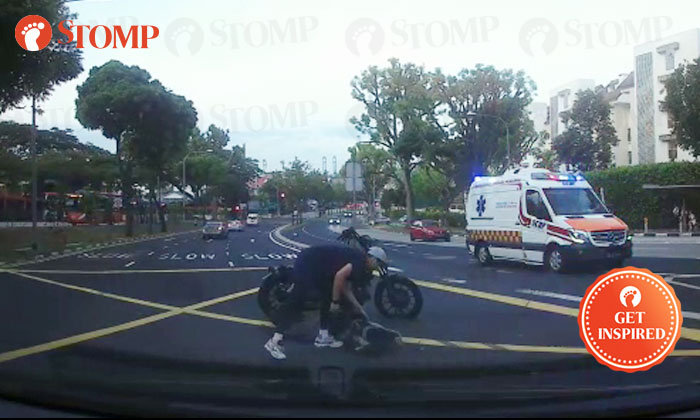 A female off-duty Singapore Civil Defence Force (SCDF) personnel rushed to assist a rider who was bleeding and lying on the road after he was hit by a bus near Kent Ridge Terminal on Monday morning (Apr 8).

Stomper Joseph alerted Stomp to the incident and shared a video that was recorded in his in-car camera.

"I was driving my passenger to West Coast Marine Fire Station when we realised an accident had occurred just in front of Kent Ridge Terminal," he said.

"My passenger, who is an SCDF officer and was off-duty, asked me to pull over immediately so that she could help the biker before the ambulance arrived.

"No one was rendering assistance to the bike but before I knew it, she was already with him.

"He was lying on the road with blood all over him.

"Kudos to SCDF officers who save and help others even when they are off-duty and rushing to work."

The SCDF told Stomp that it was alerted to the accident at about 7am and took the man to hospital in an SCDF ambulance.

In response to a Stomp media query, the police said they were alerted to the accident involving a bus and motorcycle along Clementi Road towards West Coast Highway at about 6.56am.

"The motorcyclist, a 23-year-old man, was conscious when conveyed to National University Hospital."

Related Stories
Female cyclist shouts and curses at truck driver after she gets knocked down near Mustafa Centre
Audi driver suddenly crashes into road divider on TPE -- then speeds off like nothing happened
Female driver and passenger taken to hospital after accident involving 2 cars at Jurong junction
More About:
scdf
helpful
kind
inspiring
accident
motorcyclist
injured