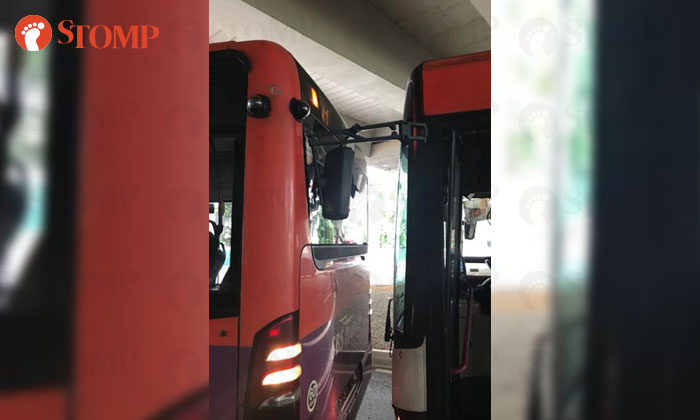 A 54-year-old man was taken to hospital after an accident involving two buses along Thomson Road on Wednesday afternoon (Apr 10).

Stomper Javier, who was a passenger in one of the buses, alerted Stomp to the accident and shared photos he took at the scene.

"It happened under the flyover near King's Court," he said.

In response to a Stomp media query, the police said it was alerted to the accident along Thomson Road turning into Norfolk Road at about 12.37pm.

One of the passengers, a 54-year-old man, was conscious when taken to Tan Tock Seng Hospital, a spokesman said.

"Two of our buses were involved in an accident on Wednesday this week when one rear-ended the other.

"One passenger was conveyed to hospital where he received outpatient treatment.

"We are in touch with him to render assistance as best we can.

"We would also like to apologise to affected passengers for the inconvenience caused.