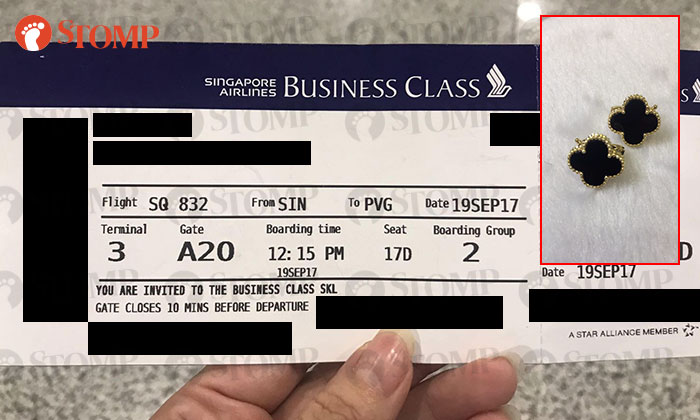 Stomper Shirley lost a pair of Van Cleef & Arpels earrings worth $5,000 on flight SQ832 from Singapore to Shanghai on Sep 19, 2017, and has been in contact with Singapore Airlines to work out compensation arrangements.

Shirley’s husband first alerted Stomp to the incident through email, and we subsequently spoke to Shirley herself over the phone, during which she shared her experience on the business class flight.

She told Stomp that on the day of the incident, she had taken off her earrings and placed them on some napkins on the table due to the discomfort from wearing them while using the headset provided by the airline.

Flight attendants then served Shirley her meal, and she was having it when she dozed off halfway. When she woke up, she found that her table had been cleared.

Gone were the food tray, along with the napkins and the earrings.

She later found out that Flight Stewardess (FSS) Wong had cleared the table without her knowledge.

Shirley requested FSS Wong to retrieve the earrings immediately, but FSS Wong allegedly told her that she was having her meal and would do it later, despite the Shirley’s repeated emphasis on the value of the earrings.

Shirley told Stomp that she even offered to search the bin herself but was supposedly rejected by FSS Wong.

FSS Wong also purportedly asked the reader if the earrings had diamonds on them, to which the S told her 'no', but they were Van Cleef & Arpels earrings, and had tremendous sentimental value to them since they were given to her by her husband as a birthday gift.

According to the Stomper, FSS Wong later informed Shirley that she was unable to search the bin thoroughly for the earrings as there were pieces of glass shards inside.

After the plane landed at Pudong Airport in Shanghai, FSS Wong apparently told the Shirley that she had advised the cleaning crew and ground staff to keep a lookout for the earrings, before leaving the plane.

Through their conversation, Shirley was under the impression that the napkins were recyclable, and said FSS Wong reassured her that the earrings would probably be found during the cleaning process.

Shirley added that FSS Wong had advised her to lodge a report at the Lost and Found counter within the airport.

Said Shirley: "At that time, I was confused. Why would she ask me to report the loss at the Lost and Found counter when the earrings were lost on the plane?

"She was contradicting herself."

However, searching through the airport, she could not find a Lost and Found counter.

She thus decided to seek help from Singapore Airlines staff, but when she reached the company’s counter, found it closed.

Upon asking other airport employees, she found out that it would only open at 9.30am, and she had to wait around four hours.

Shirley waited in the airport until the counter opened, and told a local staff member, Zhang, about the incident on the plane.

Zhang allegedly told her that the ground staff did not receive any notifications from the cabin crew and cleaning crew, nor did FSS Wong inform them that anything was out of place.

He said that Shirley that FSS Wong should have searched the bin for the earrings immediately, as chances of recovering them would diminish with time.

Shirley became more upset after listening to his clarifications and believed strongly that FSS Wong should have immediately attended to her case instead of waiting.

The following day, Shirley and her husband received news that the company did not manage to recover the earrings.

Since then, the couple has been in contact with Singapore Airlines to work out an agreement for the compensation of the earrings.

According to Shirley, they received the first email from the company on Oct 20, 2017, where they were offered 10,000 KrisFlyer Miles.

The couple rejected the offer.

They received a call from the company on Nov 3, to discuss the agreements again, although a consensus was not met.

In another email on Nov 9, the company raised the amount to 18,000 Miles, which was rejected by the couple as well.

Said Shirley: "We felt that the amount offered was too far off from the cost of the earrings, so we had to turn down the offer.

"I sent them at least two emails rejecting the offer, but they have not gotten back to me ever since."

Based on the redemption calculator on SIA's website, 15,000 KrisFlyer Miles can be used to redeem a return trip from Singapore to Jakarta on an economy flight (Saver Award Ticket).

Here are some comparisons for other Asian destinations with the same type of ticket:

Shirley’s husband, Mr Goh, told Stomp that the experience has left a bad impression on the two.

He said: "My wife is a kind person. She always thinks about other people. She had to remain patient and waited when the stewardess said she wanted to finish her own meal before trying to find her earrings.

"She also expressed the willingness to find the earring herself when the stewardess refused to look into the trash bin to search for it."

In response to a Stomp query, an SIA spokesman said: "Singapore Airlines regrets the disappointment experienced by our customer who travelled on SQ832 from Singapore to Shanghai on Sep 19, 2017.

"Efforts were made by our cabin crew and ground staff to search for the customer's misplaced items, but we were unable to retrieve them. We have been in touch with the customer on this unfortunate matter."