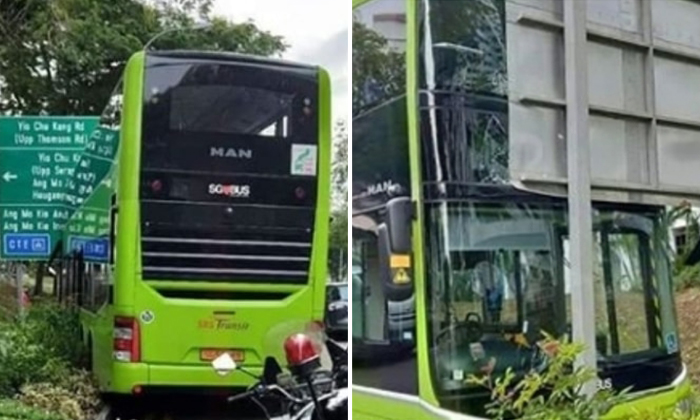 An SBS Transit bus captain was taken to hospital after crashing into a road sign along Buangkok Green on Saturday afternoon (June 6).

Readers alerted Stomp to photos of the accident that were posted on Facebook.

A netizen known as Eu Gene can be seen recounting the accident in the comments section of the Facebook post.

He said: "The driver was just exiting from the bus stop [...] when suddenly the bus swerved to the left and hit the signboard.

"Saw the driver was unconscious and took several minutes before he gained consciousness and opened the bus door to let the passengers exit."

Eu Gene also appealed for people not to make assumptions about the incident or be too quick to judge.

In response to a Stomp query, the police said they were alerted to an accident involving a bus along Buangkok Green towards Ang Mo Kio Avenue 3 at 4.16pm.

The 40-year-old male bus driver was conscious when taken to Sengkang General Hospital.