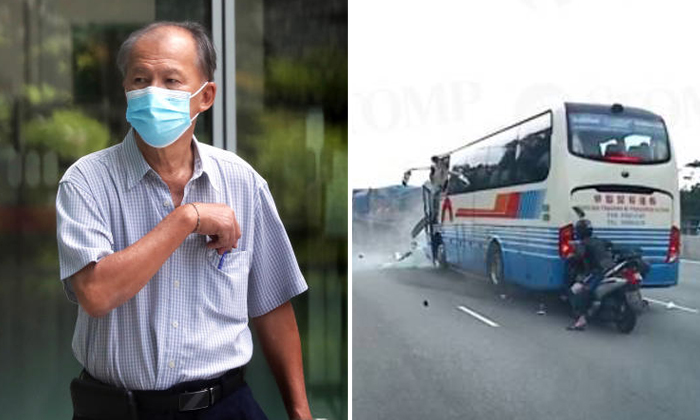 A bus driver ferrying 33 passengers failed to keep a proper lookout and rammed into a slow-moving lorry on the Bukit Timah Expressway (BKE).

On Friday (Jan 21), the driver, Ong Eng Thoo, 66, pleaded guilty to one charge of causing grievous hurt by a negligent act, with another similar charge taken into consideration in his sentencing.

The Singaporean was fined $5,000 and disqualified from driving for 18 months.

The court heard that at around 1.35pm on Oct 13, 2019, Ong, who was sending passengers to a temple, drove in the middle of a five-lane road on the BKE towards the Pan-Island Expressway.

At the time of the accident, the weather was fine, road surface was dry and traffic was light, said Deputy Public Prosecutor Gladys Lim.

At an upslope section of the expressway, a lorry fully loaded with gravel was travelling at a slow speed of around 30kmh to 50kmh in front of Ong's bus.

Through his rear-view mirror, the lorry driver saw the bus approaching from behind at a fast speed. Moments later, the bus crashed into the lorry.

A motorcycle also drove into the bus moments after the crash.

DPP Lim said: "(Ong) failed to keep a proper look out when travelling straight ahead and thus failed to slow down in time. He thus collided into the lorry travelling ahead of him."

During the collision, an eight-year-old boy who was seated at the front of the bus was flung forward, while a woman, 58, fell sideways onto the aisle. The pair and 16 other passengers were taken to hospital.

A medical report stated that the boy fractured his finger and had a cut on his scalp, while the woman fractured her spine and may face persistent pain, although it will not restrict her functionally.

Ong's lawyer Wee Hong Shern asked the judge for compassion, saying Ong, who has worked for the bus company since 1984, needed to continue to drive to make a living and support his elderly mother.

He added that the lorry was travelling at an unusually slow speed on the highway.

The judge took the prosecution's sentencing position and allowed Ong to pay the fine in instalments.

For causing grievous hurt through a negligent act, offenders can be jailed up to two years and fined up to $5,000.