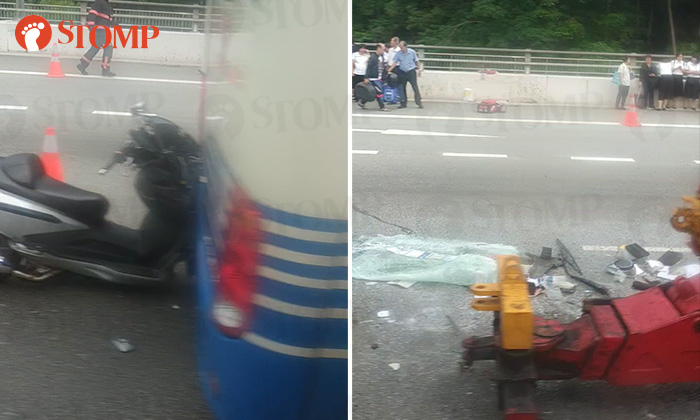 On Sunday (Oct 13), 20 people were taken to hospital after an accident involving a trailer, a private bus and a motorcycle occurred along the Bukit Timah Expressway (BKE).

Stomper Syohir was contributed a video of the accident's aftermath when he was driving along BKE on Sunday.

The video shows a motorcycle that appears to have collided into the back of a private bus.

Debris can be seen scattered on the floor in front of the private bus.

Syohir told Stomp: "I was driving towards Bukit Panjang at about 2pm when I passed by the accident scene.

"I could see people from the Singapore from the Civil Defence Force and Special Operations Command."

In response to a Stomp query, the police said: "At 1.38pm on Oct 13, the police were alerted to an accident involving a trailer, a private bus and a motorcycle along BKE towards PIE.