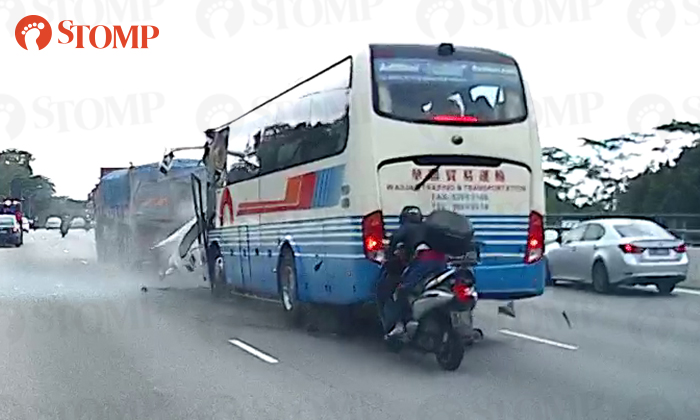 A video of the accident that occurred along the Bukit Timah Expressway (BKE) on Sunday (Oct 13) has surfaced.

The accident involved a private bus, a trailer and a motorcycle, and resulted in 20 people being taken to hospital, said the police.

Stomper Kang was driving along the BKE at about 1.35pm when he saw the accident unfold.

Kang contributed a video of the accident to Stomp and said: "I was driving home with my wife after going to the River Safari.

"I saw a bus moving on my right, driving towards a trailer which I cannot confirm whether it is moving or moving slowly.

"As the bus was moving closer and closer towards the trailer, I started to try alerting the bus driver by honking. My wife wasn't aware of what was happening until I pressed on my car horn and she asked why I was doing that.

"But the bus hit the trailer and the motorcycle hit the back of the bus. Everything happened so fast."

Kang added: "I was thinking about those passengers on the bus and worried for their safety."

"I tried stopping at the side of the road but traffic was heavy.

"I drove off only after seeing a driver no my left using his phone to make a call. I assumed he was calling for help."

Stomper Syohir first alerted Stomp to the accident with a video he took of the aftermath as he drove by at about 2pm.

Debris can be seen scattered on the ground in his video.