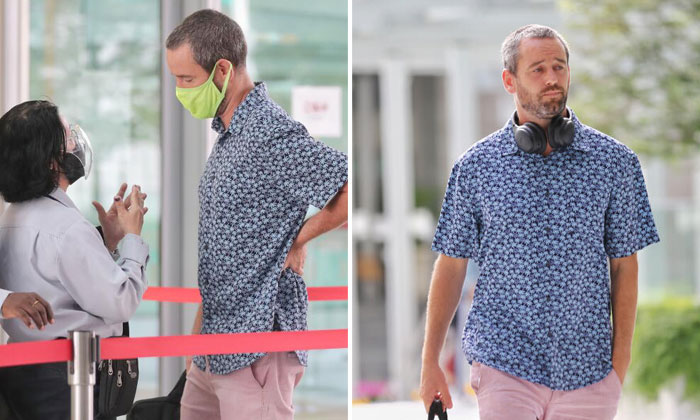 A man who was filmed not wearing a mask on an MRT train in May is now accused of failing to don one within and outside the State Courts building between 9.57am and 10.33am on July 2.

Benjamin Glynn, 40, appeared in a district court on Monday (July 19) and was handed his latest charge - his second under the Covid-19 (Temporary Measures) Act.

The Briton, who had been released on bail of $5,000 earlier this month, had his bail revoked on Monday.

Glynn first appeared at the State Courts on July 2 and was not wearing a mask when he arrived at the main entrance of the building. He put one on after a security officer asked him to do so.

He was later charged with one count each of harassment, being a public nuisance and an offence under the Covid-19 (Temporary Measures) Act.

He was walking outside the State Courts building after his court proceedings on July 2 when he was caught on video with his mask off.

His three charges on July 2 involved him allegedly failing to wear a mask while travelling on an MRT train from Raffles Place to Holland Village stations between 11.06pm and 11.31pm on May 7.

He then allegedly caused annoyance to the public during the trip by declaring: "I will never wear a mask."

In a video circulating on social media, the Briton is seen telling the other commuters: "I'm very religious... I hate seeing uncles, granddads with a mask on."

He then rejects a mask when a fellow commuter offers him one.

The video also shows a commuter leaving her seat when he sits down next to her.

On May 9, Glynn was at the ground level lift lobby of the Allsworth Park condominium in Holland Road at around 12.30am when he allegedly used threatening words while addressing two police officers - Assistant Superintendent Alvin Quek Chin Han and Inspector Chee Xiu Quan.

The Briton is said to have hurled an obscene word at them when he said: "I'm going to... drop you." He is also alleged to have adopted a "boxing stance". He has been charged with harassment over this incident.

Glynn's pre-trial conference will be held on July 23.

For each charge under the Covid-19 (Temporary Measures) Act, an offender can be jailed for up to six months and fined up to $10,000.

If convicted of harassment, an offender can be jailed for up to a year and fined up to $5,000.

Those convicted of being a public nuisance can be jailed for up to three months and fined up to $2,000.