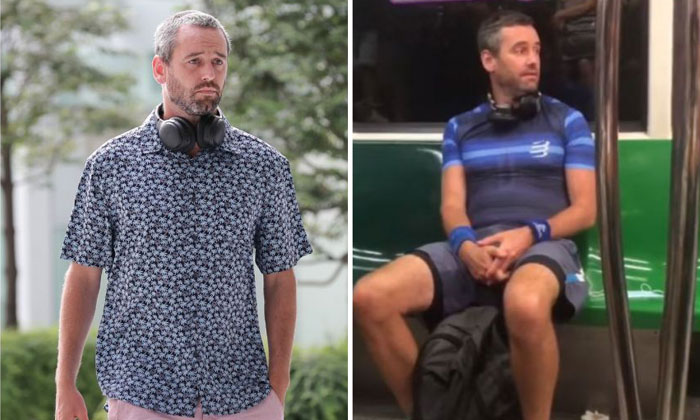 A man who was filmed not wearing a mask on an MRT train in May appeared in a district court on Friday (July 2) and was handed three charges for offences including harassment.

Briton Benjamin Glynn, 39, also faces one charge of being a public nuisance and another for an offence under the Covid-19 (Temporary Measures) Act.

Glynn is accused of failing to wear a mask while travelling in an MRT train from Raffles Place to Holland Village stations between 11.06pm and 11.31pm on May 7.

He allegedly caused annoyance to the public during the trip by declaring: "I will never wear a mask."

In a video circulating on social media, the Briton is seen telling the other commuters: "I'm very religious... I hate seeing uncles, granddads with a mask on."

He then rejects a mask when a fellow commuter offers him one.

The video also shows a commuter leaving her seat when he takes the one next to her.

On May 9, Glynn was at the ground floor lift lobby of the Allsworth Park condominium in Holland Road at around 12.30am when he allegedly used threatening words while addressing Assistant Superintendent Alvin Quek Chin Han.

The Briton is said to have hurled an obscene word at the police officer and said: "I'm going to...drop you."

Glynn was not wearing a mask when he arrived at the State Courts building on Friday morning but put one on when a security officer asked him to do so.

Casually dressed in a blue shirt and pink bermuda shorts, he later stood in the dock before District Judge Lorraine Ho with his mask covering only his mouth.

The judge then told him to put the mask on properly and he complied.

Judge Ho asked Glynn if he would plead guilty or claim trial to his charges.

The Briton replied: "I don't understand the options."

He also said that he had a "legal counsel" who was seated in the gallery.

Glynn was later spotted walking out of the courtroom accompanied by a man dressed in a striped short-sleeved polo T-shirt and trousers.

Glynn removed his mask as he stepped out of the State Courts building minutes later and the pair walked away.

If convicted of an offence under the Covid-19 (Temporary Measures) Act, he can be jailed for up to six months and fined up to $10,000.

And if convicted of harassment, he can be jailed for up to a year and fined up to $5,000.

Offenders convicted of being a public nuisance can be jailed for up to three months and fined up to $2,000.