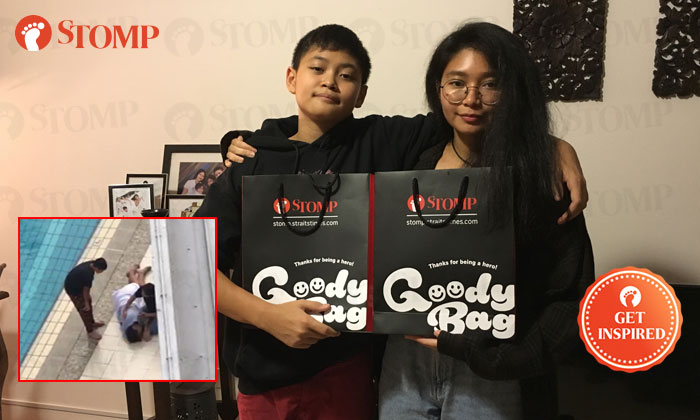 Stomp reached out to Mikkaela and Joshua Cordova to award them with a Stomp Goody Bag each for their immense bravery in saving the boy.

Stomp had previously reported on the incident on Dec 28, when Stomper Lim, a friend of the teenaged boy’s mother, had sent us videos and pictures of the incident taken by the siblings’ mother.

Stomp was invited to the Cordova’s siblings home at the condominium where they recounted the incident and shared their thoughts on the matter.

In the video, Mikkaela, known as Julis in the previous article, told Stomp how she helped pull the teenager out of the pool with Joshua’s help.

She also showed Stomp where her mother had first spotted the boy drowning in the condominium's pool.

Mikkaela, 20, who is pursuing a diploma in Rehabilitation Therapy in Canada said: "As a prerequisite, students in the course have to know how to perform cardiopulmonary resuscitation (CPR).

"It came in handy on Christmas Day and I’m really glad I got to use it."

After performing CPR, the siblings knew they had saved the teenager when he coughed up water.

“My brother and I both felt really relieved because we were really worried about the boy.

“My legs started to shake in shock because I realised what had just happened,” added Mikaela.

When the siblings were presented with the Goody Bags, they were excited and thankful.

They thanked Stomp for recognising their efforts in saving the boy and for coming down to interview them.

Stomp presented the Cordova siblings with Goody Bags for being inspirations as part of our efforts to recognise everyday heroes and highlight heartwarming deeds.

Read about the inspirational stories of other Stomp Goody Bag recipients here.

Related Stories
Brave siblings save 16-year-old birthday boy from drowning at Marymount View condo
Heroic cabby who saved Stomper in distress gets Stomp Goody Bag: "I was worried for her"
Passers-by rush to help boy who got leg stuck in bicycle wheel at Woodlands
More About:
Stomp Goody Bag
inspiring
heroes
rescue
drowning