Heroic cabby who saved Stomper in distress gets Stomp Goody Bag: "I was worried for her" 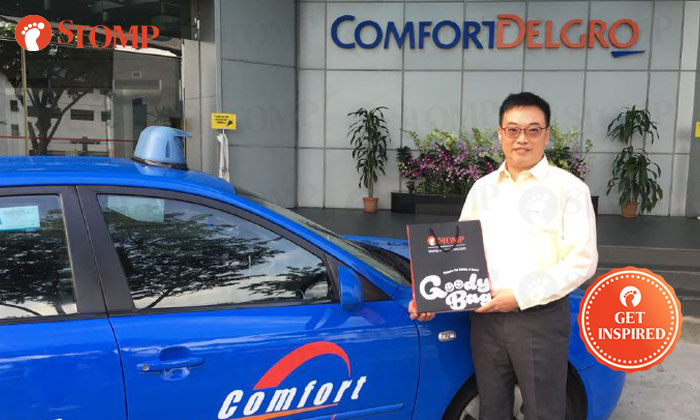 Heroic taxi driver Mr Lim Soo Heng received a Stomp Goody Bag after he came to the rescue of a damsel in distress along Straits Boulevard by replacing her punctured tyre on Dec 3.

Stomp reached out to him and presented him with the Goody Bag for taking time out of his work schedule to help Stomper Suelyn.

Stomp previously reported on the incident, when a grateful Suelyn sent in pictures of her saviour helping her change the tyre.

Mr Lim said he was headed towards Gardens by the Bay at about 8.50pm, when he saw Suelyn standing by her car at the side of the road.

He said: “I saw a helpless woman standing by the side of the road.

“I noticed that the area was quiet and I was worried for her.”

Mr Lim, who has three daughters, said: “I remember thinking to myself, if this was my daughter, I would surely want someone to help her.

“In this situation, I would not want to regret not stopping to help and allowing the chance for something potentially bad to happen.”

Mr Lim told Stomp that changing her tyre took about 15 to 20 minutes.

Stomp understands that 8.30pm to 9pm is a peak period for taxi drivers as there are many potential customers looking for a cab during this period.

Suelyn told Stomp that Mr Lim had also advised her on which car workshop to go to.

When Stomp asked Mr Lim what advice he gave, he said: “Her tyre was a service tyre, which is relatively smaller to the other tyres her car had.

“I was worried that the smaller tyre might cause her car to skid if she drove too fast, so I asked her to visit a car workshop in Lavender, which is open till late at night.”

It turns out that Mr Lim has stopped to help many other motorists, including elderly taxi drivers, change their tyre on several other occasions.

When asked if he considers himself a helpful man, Mr Lim replied: “I don’t consider myself helpful, but I will lend a hand when someone is in need.

“Helping someone is not a harm, until you expect something in return.

“This is what my mother taught me as I was growing up.

“Sometimes, even after sincerely helping, the other party might not be appreciative.

“There was a time where I was scolded for helping someone and I told my mother about it.

“She told me that their response is not my concern and that I shouldn't be angry or sad about it because I learnt something from the situation.”

From speaking to Mr Lim, one is able to tell that he is an extremely filial son and he also described himself to be a “family man”.

We asked more about his helpful habits and traced them back to his mother.

Mr Lim told Stomp: “Since I was young, my mother and I have always helped out at old folks homes.

“Over there, I picked up many values such as empathy, filial piety and respect.

“One thing that is special about my mother is that she never told me to be helpful. She just brought me along to volunteer, and taught me through her actions.”

At this point during the interview, Mr Lim’s wife called.

He readily picked up the phone and spoke to his wife gently about where he was and what he was doing.

Stomp interviewed Mr Lim about his kind act of helping Stomper Suelyn, but found out that he lives his everyday life being helpful and of service to others.

Mr Lim added: “When ComfortDelGro told me I was going to receive a Stomp Goody Bag, I was intrigued and curious to know what it was.

“I had never received a Goody Bag before and was excited.

“I am very thankful to Stomp for recognising my actions, and hope that more people can help each other on a daily basis."

The first thing he said was: “Wow! I know I can give my wife and my daughter some of the items in here.”

Stomp presented Mr Lim Soo Heng with a 'Goody Bag' for being an inspiration, as part of our efforts to recognise everyday heroes and highlight heartwarming deeds.

Related Stories
Awesome cabby helps Stomper to change tyre when no one else stopped, declines reward
Biker who stopped to direct traffic gets Goody Bag: "When I saw it on Stomp, I knew it was a big deal"
GrabHitch driver gets Stomp Goody Bag for fetching passenger and dog with fever when no one else would
More About:
Stomp Goody Bag
inspiring
kind
kudos
heroes