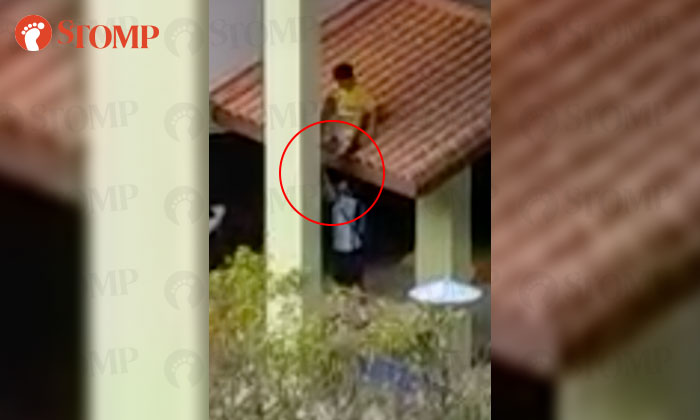 Stomper Lim spotted some boys in school uniform playing with their friend who was sitting on the 1st-storey roof attached to a multi-storey carpark at Block 841A, Jurong West Street 81.

The incident happened on Thursday (Aug 3) at around 5.45pm.

Lim took a video of the boys.

In the footage provided, the kids in uniform could be seen playing around, and tugging at the legs of another boy who was sitting precariously on a roof connected to a multi-storey carpark.

Later on, one of the boys in uniform approached a passer-by in black and appeared to say something to him but was ignored.

According to Lim, the boys shouted at passers-by and even threw water at a moving car.

Lim also added that this was not the first time the kids had climbed over on the roof and harassed passers-by, including him.

“The kids shout at anyone who walks by and cause a ruckus.

“Moreover, this is dangerous.”

Related Stories
Parents, please, please, please educate your kids on road safety: One foolish mistake like this could be their last
Secondary school students getting out of hand -- chanting gang cheers on bus
Students in uniform get carried away with major PDA on MRT
More About:
children
kids
uniform
undisciplined
ruckus
nuisance
Jurong West carpark
safety