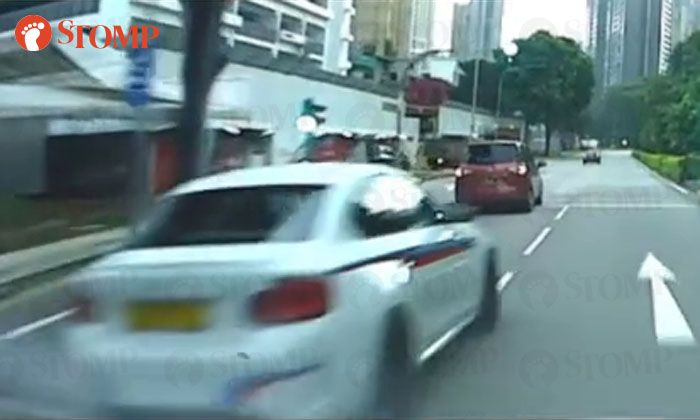 Stomper Yoga was alarmed when a BMW driver zoomed up from behind and squeezed in between him and another car along Commonwealth Avenue on Wednesday (Nov 21).

He told Stomp that he was "inches" from disaster.

"I was driving in the first lane towards Leng Kee Road when the white BMW sped past me on the left and abruptly squeezed in front of me and a red car that was in the second lane," he said.

He shared a video he captured of the incident from his in-car camera.

"It was very scary and dangerous and could have caused an accident if I happened to be travelling faster," he said.

He added that the man's driving struck him as similar to that of a notorious blue Toyota Prius that was caught on video several times speeding and travelling in a reckless manner.

The driver of the Prius was arrested for dangerous driving almost two years ago but his car was spotted dangerously cutting across lanes again just last week.

"I am totally disgusted with his actions and dangerous," he said.

"He has no regard for safety, his road and driving manners should be dealt with severely."

The Stomper said he has since reported the incident to the Traffic Police.

He is also appealing to netizens to identify the driver as he did not manage to capture the full licence plate number.

"I managed to make out the numbers 1717 but he was going so fast I couldn't capture the rest," he said.

"The white BMW has blue and red stripe stickers on its side and bumper so it should be easy to spot."