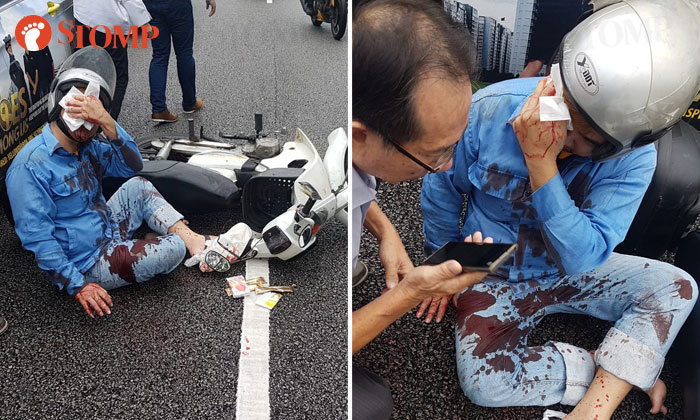 A 28-year-old motorcyclist was taken to hospital after he was involved in an accident with a car and taxi along the Tampines Expressway (TPE) on Monday morning (Apr 1).

Stomper Afiz alerted Stomp to the accident that happened after the Sengkang exit.

In the photos, the rider is seen bleeding from his face, with bloodstains on his shirt and jeans.

"The guy was riding in between a cab and car when he hit the side of the taxi and skidded," said Afiz.

"He suffered a deep cut on his face and eyebrow and the blood wouldn't stop flowing.

"I was the third rider behind him and kept honking when I saw him skid.

"I stopped beside him to assist and call for a paramedic."

"A van driver called me over to hand me a packet of tissues to give the rider."

Afiz told Stomp that the road was slippery at the time of the accident due to rain.

"I just hope there are witnesses who can provide a video and that the guy is okay."

In response to a Stomp media query, the police said they were alerted to the accident on the TPE towards the Pan Island Expressway (PIE) at about 8.27am.

The motorcyclist, a 28-year-old man, was conscious when taken to Changi General Hospital, a spokesman said.