Biker and pillion rider thrown off motorcycle after car driver jams on brakes, 'swings' to the left 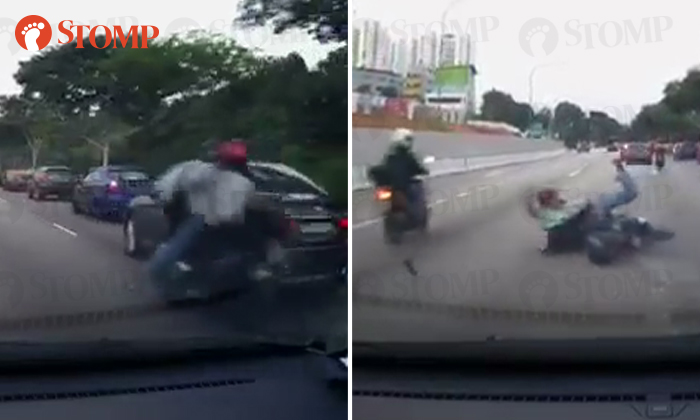 A biker and his pillion rider were thrown off their motorcycle after it crashed into a car whose driver had jammed on the brakes before veering to the left.

The incident occurred along the Kranji Expressway (KJE) towards the Pan-Island Expressway (PIE) and Upper Jurong Road today (Aug 30) at around 7.08am.

Stomper Celine witnessed what happened and sent a video to Stomp.

She said: "The car driver jammed on his brakes due to another car in front and swung left.

"The first motorcyclist missed the car but the second biker and his pillion rider didn't manage to escape."

Celine's video shows the two victims being thrown off their bike and skidding across lanes.

Fortunately, oncoming vehicles reacted swiftly and managed to avoid them.

The Stomper added: "We left after we saw that they were able to stand up.

"Hopefully this video reaches the motorcyclist."

In response to queries by Stomp, the police said they were alerted to the accident at 7.23am.

Related Stories
Biker knocked off motorcycle by idiot driver, then gets run over and dragged for 200m by another car
Biker dies after being run over by car in freak PIE accident involving wooden plank
Biker flung off motorcycle, over car and lands on road after accident along Eng Neo Avenue
More About:
biker
bike
motorcycle
motorcyclist
accident