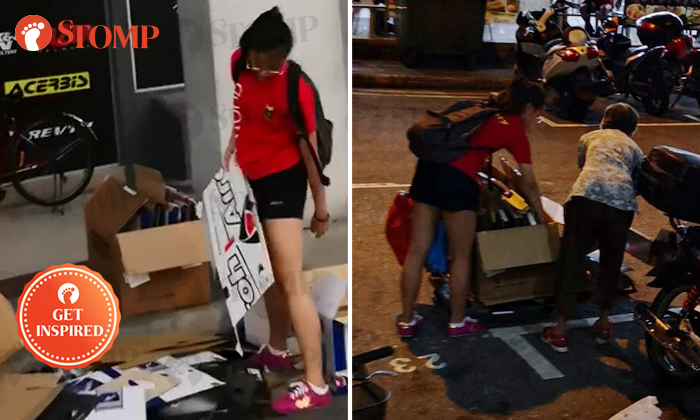 The student, identified as 14-year-old Erlene Ang, received a Stomp Goody Bag for her heartwarming deed.

Check out the full interview here: Beatty Sec angel who aided 91-year-old woman: 'Nothing is a barrier if you wanna help someone'

Stomper Raymond was on his way to dinner at a hawker centre in the Jalan Besar area when he saw a girl helping an elderly woman with her cardboard along Kelantan Lane on Monday (March 18).

Raymond said it was around 7.15pm when he first spotted the girl helping the woman to flatten and tidy carton boxes, before loading them onto the latter's trolley.

The girl, who was wearing a Beatty Secondary School shirt, did not appear to be acquainted with the auntie, added Raymond.

Heartened, he decided to film the pair from afar.

After finishing his dinner 30 minutes later, Raymond noticed that the girl was still in action. By then, the sky had turned dark.

Raymond told Stomp: "I decided to approach the girl and asked if she was doing volunteer work, but she shook her head.

"I then asked her, 'So you are just helping?' and she nodded.

"I guess she was shy or perhaps taught not to talk to strangers.

"The next moment, a gentleman appeared."

According to Raymond, it was the girl's father out looking for her as she had not returned home.

Raymond said: "He asked her where she had been and said that he had been out looking for her. I think they live nearby.

"The girl told her father that she was helping the old lady.

"The happy old lady told the girl's father that his daughter was very helpful."

The Stomper said it was around 8pm when he left them to talk while he continued on his way.

He added: "I found the whole thing very touching.

"Nowadays, you don't see things like this very often. Lending a helping hand is free but people tend to walk past and not care about old people, which is why I want to share this."

You know how they say not all heroes wear capes? Well, not all angels have wings either.

Stomp has reached out to Beatty Secondary School for comment.