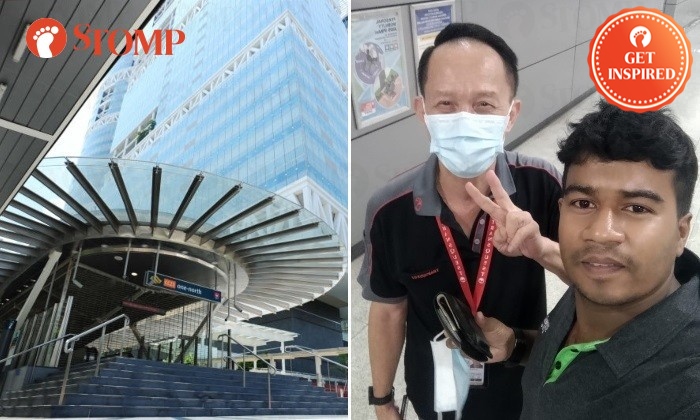 When Bangladeshi worker Tajul discovered he had lost his wallet containing $450, he cried and cried.

But all's well that ends well, thanks to one MRT station cleaner uncle.

A Stomper shared that the uncle found the wallet and returned it to his colleague Tajul with the cash intact.

"Uncle refused to take 'coffee money' from my colleague," said the Stomper. "I thought it would be good to show appreciation to the uncle through Stomp."

On that fateful day on July 15, Tajul was taking his lunch break at one-north MRT station exit B. He had brought his own food to eat there.

The 28-year-old driver had worked in Singapore for seven years.

After finishing his lunch, Tajul cleared the rubbish, picked up his phone and his bag, and went back to work.

At 3pm, he realised he had left his wallet behind. He returned to the MRT station to look for it. He searched and searched, but his wallet was gone.

Apart from his driver's license and bank card, the wallet contained $450 in cash, $300 of which was given by Tajul's boss, Mr Lee, for his allowance. The rest was borrowed from a friend.

What Tajul did not know then was that a cleaner at one-north had found his wallet.

The wallet did not contain Tajul's phone number, but it did contain his work permit with the name of the company that employs him.

So the cleaner called Mr Lee, who informed Tajul.

Tajul said that when he learnt his wallet had been found, he was "very, very happy".

A day after losing his wallet, he went back to one-north MRT station to meet the cleaner.

"Uncle gave me back everything," said Tajul. "Uncle is a very, very good person."

He added: "I asked uncle, 'If you don’t mind, I want to give you some money.' But uncle answered that he didn’t want it.

Tajul said he did not know the uncle's name.

"I pray for uncle to have a blessed life."

Related Stories
Man looking for Louis Vuitton wallet containing $300 that he dropped in taxi
Singaporean man, 80, moved to tears when lost wallet with $1,000 is returned in Malaysia
Man 'can't believe' he got back his lost wallet containing $500 after 10 days
More About:
lost
found
money
Bangladeshi
MRT station
get inspired
gratitude