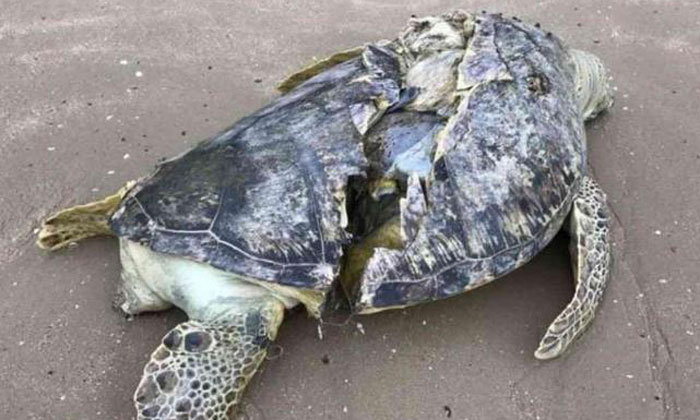 A sea turtle more than a metre long was found dead along Changi Beach on Monday (Jan 2), believed to have been cut by a ship propeller.

ST reader Chandran V. R. told The Straits Times that he had been jogging at about 8.30am when he saw the carcass from a distance.

"At first I thought - how come this bulky item is there. Initially I didn't know what it was," said the 46-year-old managing director of a real estate agency.

He had been jogging along the Casuarina Cove Trail, near the Changi Ferry Terminal, when he noticed a bad smell.

Mr Chandran went closer and saw a dead turtle, more than a metre long, on the sand.

"It looked like it had been dead for at least two to three days," he said.

He then contacted the Agri-Food & Veterinary Authority of Singapore (AVA), as he "didn't want anyone to disrespect this carcass".

"It is a beautiful creature which got into trouble and lay dead on our shores. I just wanted the carcass to be discarded respectfully," said Mr Chandran.

He added that he believes AVA has retrieved the carcass, based on location markers he sent to them.

"You don't usually get to see a turtle of that size in Singapore waters," he said.

She told The Straits Times that Acres had previously rescued an injured olive ridley turtle which was also possibly hit by a propeller.

It was rehabilitated and released back to the wild.

A dolphin carcass washed up on a beach at East Coast Park in July last year (2016).

A year before that (July 2015), a sperm whale carcass was found off Jurong Island, and its skeleton put up for exhibition at the Lee Kong Chian Natural History Museum in March last year (2016).