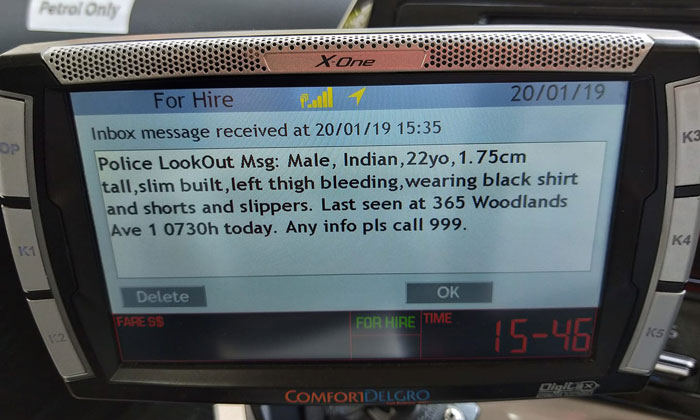 The 22-year-old man was arrested along Woodlands Circle on Monday (Jan 21).

The authorities are looking for a full-time national serviceman (NSF) who fled from the police on Sunday morning (Jan 20).

In response to a Stomp media query, the police said their officers were conducting checks on two men at Block 365 Woodlands Avenue 1 at around 6.10am.

During the checks, one of the men, who had fresh lacerations on his left thigh, suddenly bolted and fled from the area.

After conducting preliminary investigations, the 22-year-old man was found to be an NSF who is wanted by the Singapore Armed Forces (SAF) for being Absent Without Official Leave (AWOL).

At 3.35pm, taxi drivers received a lookout message to keep an eye out for the man who was described as being about 1.75m tall, slim and wearing a black shirt, shorts and slippers.

He was last seen at the mentioned location at around 7.30am.

Anyone who saw him was instructed to call the police at "999".

The Straits Times understands that the man is still at large and no arrests have been made.