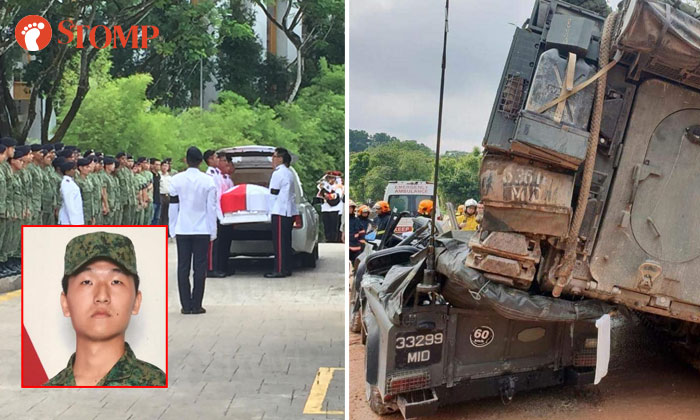 Corporal First Class (CFC) Liu, 22, a transport operator from the SAF's Transport Hub West, died after a Bionix armoured fighting vehicle reversed into a Land Rover he was operating as part of a field training exercise on Saturday morning (Nov 3).

He was posthumously accorded the rank of CFC.

Stomper Loh was at Mandai Crematorium where hundreds of servicemen lined the driveway as the hearse pulled in behind a military band.

He shared photos and video from the procession.

The Stomper, who works in the funeral line, told Stomp he was in the area and stopped to pay his respects to the late NSF.

"It's the first time I've seen that many people gathered outside the crematorium," he said.

The casket was brought into a hall where a ceremony took place in private.

One of CFC Liu's sisters, who declined to be named, had earlier told reporters that the family was waiting for him to return to celebrate her birthday last Saturday.

Speaking mainly in Mandarin to members of the media at the wake at Block 787D Woodlands Crescent on Monday afternoon (Nov 5), CFC Liu's sister said her brother was very close to the family.

"Nov 3 was my birthday, but it also turned out to be the day that he died. We would always celebrate together. He really loved his family," she said.

CFC Liu's father, who also declined to be named, said the news was hard to accept, as he was the only son.

"But it was his duty to serve national service," he added.

CFC Liu's family shared that he had wanted to go to university and get a job as an engineer after completing his national service (NS).

He was described as a hard-working and thoughtful individual who was kind to others.

"He was very hard-working, and usually studied until late in the night. He would also help his schoolmates with revising their work," said his sister.

"He was very big-hearted and took part in events such as charity runs. When his friends needed help, he would teach them to be positive."

The entire family of CFC Liu, his parents and two elder sisters, was applying to become Singapore citizens, according to the sister who spoke to the media.

CFC Liu had enlisted in April this year and was very determined and motivated during training.

He was also well-liked by his peers and seen as a good example.

His father said: "He was always proud to do NS. He served happily, and asked us to go to his passing-out parade to take pictures with him and all."

CFC Liu's operationally ready date would have been April 2020.

His sister declined to comment on the investigations by Mindef, as they were still ongoing, but "believe Mindef will give us justice".

Defence Minister Ng Eng Hen took to Facebook on Tuesday and said he had written to CFC Liu's parents to offer the Defence Ministry's and the SAF's deepest condolences.

He added he was praying that the family "will find comfort and healing through this difficult time".

"We honour the memory of Liu Kai, a true son of Singapore who gave his life in service of his country. May he rest in peace," he wrote