Another Jaguar catches fire, this time along TPE 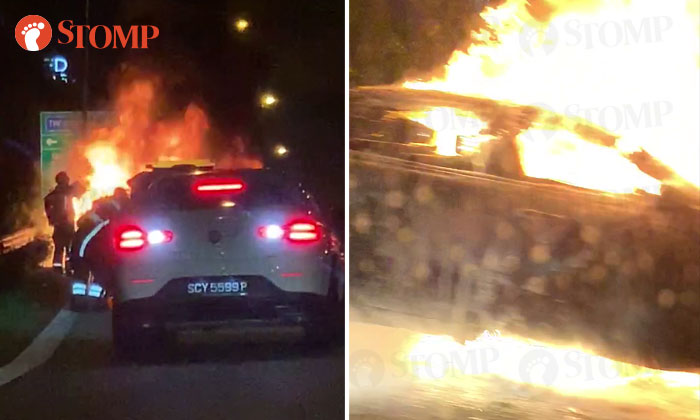 A Jaguar car caught fire along the Tampines Expressway towards the Pan Island Expressway, before the Upper Changi Road North exit on Wednesday evening (Jan 30).

Stomper Lian alerted Stomp to the fire and shared a video of the car engulfed in flames she took while her boyfriend was driving past it.

"My boyfriend told me it was a Jaguar," she said.

In the video, a Red Rhino is at the scene and Singapore Civil Defence Force (SCDF) personnel are seen fighting the fire.

In response to a Stomp media query, the SCDF said they responded to the car fire at about 7.37pm.

"The fire was extinguished by SCDF using a hose reel and two compressed air foam backpacks," a spokesman said.

There were no injuries and the cause of the fire is under investigation.

Previously, Stomp reported on a Jaguar that had caught fire at a carpark near Block 229 Pending Road on Monday (Jan 28).

The flames from the burning vehicle had caused a neighbouring Suzuki to catch fire too.