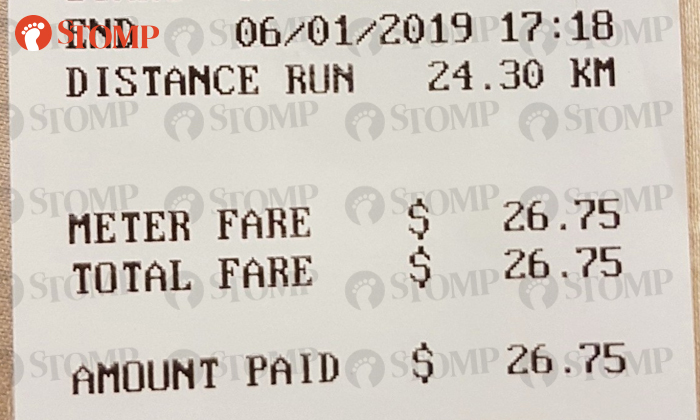 Yet another taxi driver has come forward to share his encounter with a fare evader, whom he felt had gone to lengths to avoid paying for a $26.75 ride.

Stomper Nik, 49, decided to share his story after reading a report from fellow ComfortDelGro cabby, Stomper Sanchez, whose passenger had failed to pay for a $26 ride on Monday (Jan 7).

In a Jan 9 article, Sanchez lamented about how hard it is to make a living as a taxi driver -- a feeling that Stomper Nik is all too familiar with.

In Nik's case, a man had flagged down his taxi along Jalan Besar Road, opposite the MRT station, on Sunday afternoon (Jan 6).

Nik said: "The man, who looked to be in his mid 20s-30, boarded my taxi at 4.23pm and told me he wanted to go to the Singapore Safety Driving Centre in Woodlands.

"While travelling on the Central Expressway (CTE), he said he wanted to fetch his mother to Khoo Teck Puat Hospital and would call her when we were nearing his destination.

"When I approached Woodlands Mart shopping mall, the man suddenly asked me to turn left into the carpark and stop at the pick-up / drop-off (PUDO) bay.

"He said he would go into the mall to get his mother and asked me to please wait for him.

"Usually, my passengers would leave their bags behind or offer to place a deposit with me if they had to go somewhere, but this man exited my taxi before I had a chance to reply.

"I also found him to be decent and filial, so I did not ask for payment in advance.

"It was only when I saw a car pulling up behind me, then did I realise that both the PUDO bay and the driveway to the multi-storey carpark are single-carriage way with cement blocks separating them. This meant that I was unable to wait there.

"In any case, I still waited for five minutes before I had to exit the PUDO bay, as the car behind me had turned off its hazard lights and was slowly inching forward as a signal for me to go.

"I made a big round to get back to the PUDO bay, but there was still no sight of the passenger and his mother. I then parked my car at the multi-storey carpark and went around looking for him but no, he had disappeared for good."

According to Nik, he also had to pay a gantry fee for entering Woodlands Mart's premises, though he is unable to remember the exact amount.

The passenger's fare from Jalan Besar to Woodlands totalled to $26.75, excluding the gantry fee.

"The meter displayed $21+ when the passenger exited from my taxi. The sum of $26.75 was for right up till I left the PUDO bay," added Nik.

Asked if he thinks whether the passenger might have made an honest mistake or simply forgotten, Nik said he doubts it.

Nik told Stomp: "I feel that he used the PUDO bay to evade fare payment, knowing that no driver can simply just park at the bay and chase after him for payment."

Having been with ComfortDelGro for almost five years, Nik is no stranger to fare evaders, however.

He shared: "There have been times in the past when I gave people free rides after they said they had forgotten their wallets. There are also those who had just left the hospital or prison and said they only needed a short ride. I didn't mind as the fare was always less than $10.

"But this time, I feel that the passenger did it intentionally. Furthermore, it happened in broad daylight like in the case of Stomper Sanchez. In the past, fare evasion typically happens only at night, like when the passenger is drunk.

"I hope our cabbies are aware that there are passengers using PUDO bays to deliberately get away with not paying fares.

"Now I am wondering, does it pay to be kind? Who can help our fellow cabbies?"

Related Stories
Cabby who waited 30 min for fare evader: 'This is what I get for working so hard to support my family'
Woman promises to pay $9.54 taxi fare -- only to delay matter for over a week and then go MIA
Cabby says man evaded $43.50 fare by pretending to be drunk, then showed police he has money
More About:
fare
evade fare
taxi
cabby