Cabby who waited 30 min for fare evader: 'This is what I get for working so hard to support my family' 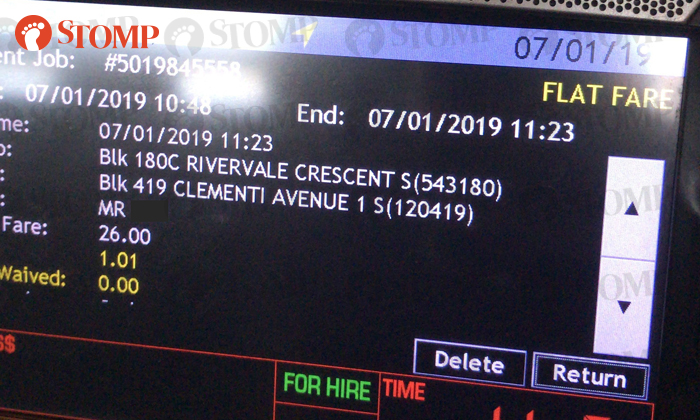 Ask any taxi driver and you will know that it is not an easy job, with long hours at the wheel, rental fees to pay and having to deal with the occasional unreasonable customer.

Even worse is when you encounter a fare evader who disappears on you, like what happened to 36-year-old Stomper Sanchez.

Sanchez, who has been a ComfortDelGro cabby for almost five years, said he had accepted a $26 booking from Block 180C Rivervale Crescent to Block 419 Clementi Avenue 1 on Monday (Jan 7).

He picked up the passenger at 10.48am and reached his destination at 11.23am.

Sanchez told Stomp: "When we arrived, the passenger asked if he could go upstairs to his house to get money for the ride. He said he was 19 years old and had lost his wallet.

"As I pitied him, I told him that it was okay if he didn't have the money now and to call me when he did. But he said no and insisted that he had the money, and gave stories like how it was upstairs.

"I had a feeling that he would not come back, so I told him to just say so if he didn't have money. I didn't want to waste time waiting in vain so I asked him to just tell me the truth.

"However, he told me not to worry and said he would come back. So, I waited for him."

Unfortunately, after waiting for half an hour, the passenger still had yet to re-appear.

Sanchez added: "I smoked two cigarettes while waiting for him for nearly 30 minutes. When it was almost 12pm, he still did not come down.

"That was when I realised that he was not returning."

According to the Stomper, this is his first time encountering a fare evader.

He hopes to prevent fellow cabbies from getting into similar situations by sharing his story.

"It's not about the money as I can earn it back. Furthermore, ComfortDelGro offered to pay me the $26," said Sanchez, who works from 4am to 6pm seven days a week.

"But the thing is, I am scared for other drivers who are working hard for their families. I don't want this to happen to them, which is why I want to share it.

"My wife is pregnant with twins and I have no CPF, so many things have to be paid in cash.

"I'm working so hard for my family and this is what I get.

Related Stories
Woman promises to pay $9.54 taxi fare -- only to delay matter for over a week and then go MIA
Man who did not pay my mum $19 for your taxi fare, please come forward before we make a police report
Passenger allegedly vomits in cab, refuses to pay fare and shoves cabby onto the ground
More About:
taxi
cabby
fare
evade fare