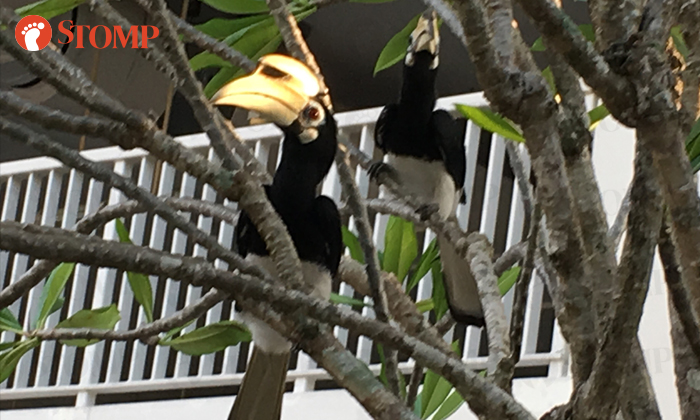 Stomper Fuadi was enchanted upon seeing a pair of hornbills in Queenstown recently.

He has rescued other birds on multiple occasions, but this was his first encounter with the exotic hornbill.

"Rare and exotic birds including these pair of hornbills are often found on the premises.

"A year ago, I rescued a Green Dove which flew directly into a transparent glass and fell onto the ground, unconscious.

"Fortunately, after bringing it to the vet at Mount Pleasant, it was nothing serious and the bird had no broken wings.

"After feeding her some water, the bird regained consciousness and flew out of the temporary box a few hours later.

"I've also rescued a baby 'Tiong Kuning' (also known as the Black Nape Oriole) which was found wandering helplessly near a tree, and placed it on high ground for fear of opportunistic stray cats from the neighbourhood.

"Occasionally, you can also hear the sound or cries of 'wild parrots' filling the silent morning and evening.

"But this is my first time seeing these rare hornbills."