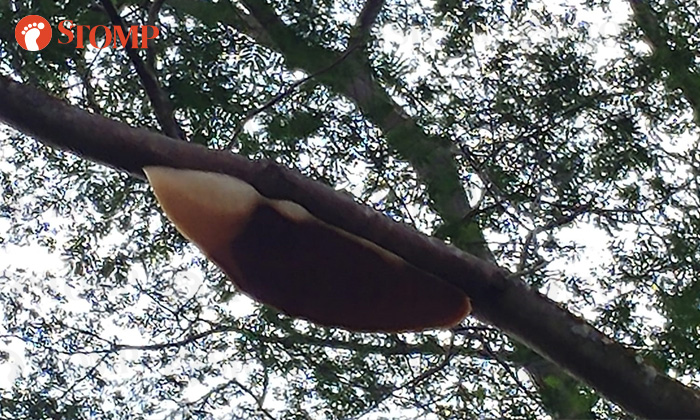 Stomper Lai was cycling along a mountain bike trail at Chestnut Nature Park yesterday (Jul 16) at about 3.30pm when he saw a "translucent" object on the branch of a tree.

In photos Lai shared with Stomp, a brown object with a whitish tip is seen stuck on the underside of the tree branch.

Because of the distance between Lai and the object, he could not tell what it was.

He said: "It was so high up, about four-storey high.

"It was about 4 feet long and some parts appear to be translucent.

"I would really want to know what it really is, whether it's an animal, a hive, or a coagulated tree sap."

He speculated a number of possible reasons for honey bees, also known as Apis dorsata, to abandon their nests.

“From the photograph, the hive looks exposed, so it could be that it got too warm, or it could be that population of the bees inside the nest grew too large for it, resulting in lack of space, food, and water inside,” said Mr Foo.

He added that other forms of disturbances, such as the constant fogging around the estates in that area, or potential parasites and diseases, could also be a reason.

"People should just leave the nest as it is," he advised, adding that it poses no harm to humans.

What do you think it is?