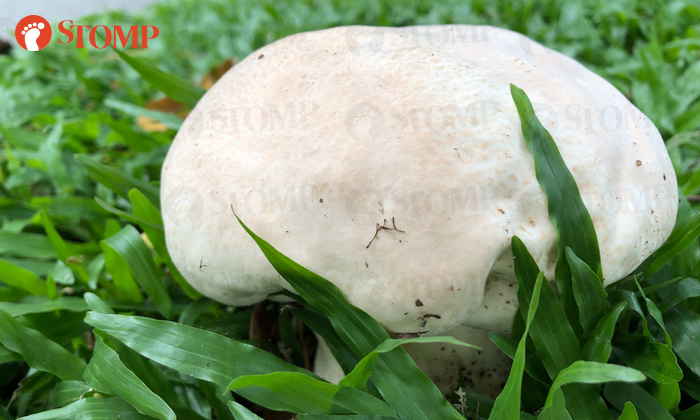 Stomper AkiraJ was crossing the road at Buangkok Drive in Hougang last week when he stumbled upon a puffball on the road divider.

AkiraJ said the first time he saw a puffball was three years ago, at a field in front of The Minton Condominium that was in Hougang as well.

Recounting his first encounter with the gigantic mushroom, he said: "There were about eight to 10 of them at the field then, some were as big as 25cm in diameter and the smaller ones were about 12cm in diameter.

"I was surprised at the time because I had not seen them before."

This time, AkiraJ was just as excited upon encountering the mushroom again last week, seeing it again after so long.

Intrigued by the size and appearance of the mushrooms, he did a research on them before finding out that they were called puffballs.

Puffballs thrive in grassy areas and they grow quickly, especially after a day of rainfall.

Sizes of puffballs can range from the size of a five-cent coin to as large as a football.

"I just want to share this to get more people to be aware of nature sightings in Singapore," said AkiraJ.

Related Stories
Have you seen mushrooms this huge in Yio Chu Kang?
Stomper makes 'precious' discovery at Pearl’s Hill City Rd
Can you guess what this weird-looking plant is?
More About:
mushroom
nature
unusual