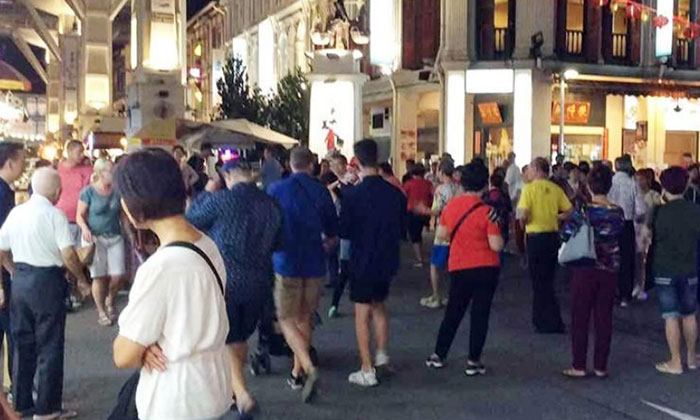 Shop owners at Chinatown said business has been adversely affected since a group of elderly citizens started gathering outside their stalls to practise line dancing on the weekends two weeks ago, prompting them to call the police.

The owner of a shop that sells musical instruments, Mr Lin, 45, told Shin Min Daily News that the group would meet at Smith Street between 5pm to 6pm to practise their dance.

During this time, the crowd obstruct human traffic and affect the livelihoods of the shops nearby. This has happened for two consecutive weekends.

“There are about 40 of them in the group. Once they start dancing to the music, some passers-by would also join in, and the group becomes even larger.”

Mr Lin said that the sheer size of the group prevents others from passing, while also attracting an audience. This thus affects the businesses nearby.

“Last week, the group danced from the evening until nearly 10pm in the night. My business was badly affected. For two nights straight, I had zero income.

“The busiest times at my shop are usually during the weekends.”

Mr Lin said that the music produced by his instruments was drowned out by the blaring music played by the group, which naturally drove away potential customers.

“During this period, business was down by nearly 80 per cent. The rental fees here cost nearly $20,000 every month.

“Anything that affects my business can have a huge impact. Last Friday night, I didn’t even manage to earn $50.”

Mr Lin said that some business owners called the police and officers were dispatched to the scene.

However, even after the officers departed, the group of elderly folks remained behind.

Related Stories
Bukit Panjang resident "tortured" by woman who "screams her lungs out like she is being murdered" daily
Man on electric wheelchair spits "about 5 times" on train from Bugis to Paya Lebar
More About:
Chinatown
business
inconsiderate