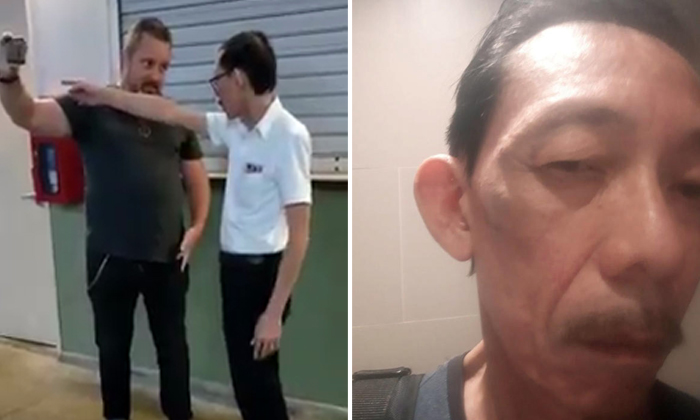 A 60-year-old security supervisor who was punched by a man at Roxy Square on Thursday (April 4) suffered a swollen eye and a sprained neck in the incident.

Mr Andrew Lim, who is from Regal Security, also had his glasses broken.

The police told Stomp on April 5 that a 47-year-old man is assisting with investigations into the case of voluntarily causing hurt.

According to Mr Lim, the man had approached a security guard complaining that he was trying to leave the building but could not find an exit at around 12.15am on the day of the incident.

The guard tried to explain that the main exit of the building was locked as it was late, reported The Straits Times.

However, the man refused to listen and asked to speak to the supervisor, Mr Lim.

Mr Lim said he tried to tell the man that there were several other exits from the building, but was ignored.

He added that the man began behaving in a threatening manner, gesturing with his hands and standing very close to him.

Mr Lim asked: "Are you trying to hit me?"

According to Mr Lim, the man replied: "Yes, maybe later."

At this point, Mr Lim asked the guard to take a video of the incident, in case anything should happen.

Calling the man's actions "very uncalled for", Mr Lim said: "I've met drunkards and all, but they were not abusive, not aggressive... I thought he might push me, but not like this."

Mr Lim was later given two days' medical leave and sent for an X-ray examination. Afterwards, he was told that he had to go for a CT scan as an abnormality was detected during the X-ray exam.

He said that as of Friday afternoon he was still taking painkillers to cope with the pain from his injuries.

Regal Security general manager K. Bhaskaran told ST that the man returned to the mall to surrender himself late on Friday afternoon after footage of the incident went viral.

Mr Bhaskaran said the man also wanted to apologise for the incident.

The general manager also said that he has hired a lawyer for Mr Lim and that the firm intends to take legal action.

Mr Lim said Regal Security will be covering his medical and legal costs.