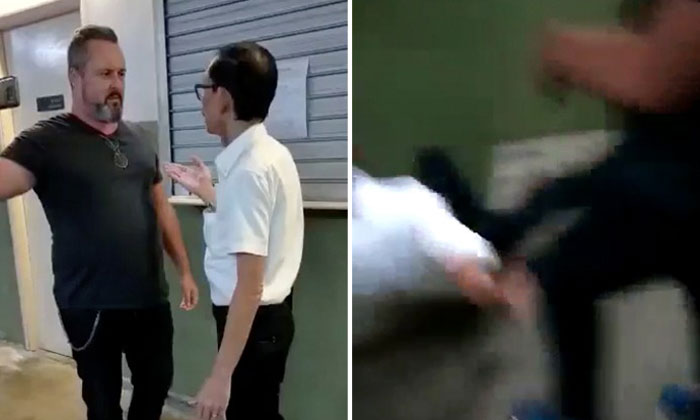 A 47-year-old man is assisting police with investigations after his confrontation with a security guard at Roxy Square went viral on Facebook.

The incident is believed to have happened in the building's carpark past midnight on Thursday (Apr 4).

In the video posted on All Singapore Stuff's Facebook page, the man is seen recording a video on his phone while talking to the security guard.

The guard is heard telling the man to talk nicely but the man retorts with a "F**k off".

When the security guard tells him he isn't being cooperative, the man just laughs at him.

The security guard then tries to show the man the exit to the carpark but is blocked by his arm.

The man laughs again and tells the guard, "You walked into my arm".

When the guard gestures to the person recording the video, the other man points and laughs.

Ths guard then explains that the carpark has three exits and security would help to direct him out.

However, the man continues to laugh and mocks what the guard said to him.

As they walk away, the man is heard calling the guard an "idiot".

The guard trips after their legs get entangled and the other man is seen kicking his foot out.

When the guard says "enough, ah!" the other man punches him, causing him to fall to the floor and his spectacles to fly off his face.

The man recording the video starts to run and is heard saying he'll call the police.

In response to a Stomp media query, the police said they were alerted on Apr 4 at about 12.17am to a case of voluntarily causing hurt at 50 East Coast Road.

"A 47-year-old man is assisting with investigations," a police spokesman said.