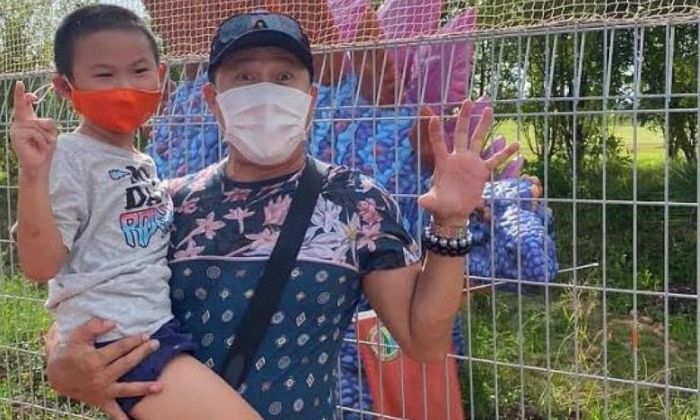 Veteran actor Chen Tian Wen, 57, told The New Paper yesterday that he, his wife and their five-year-old son were visiting the attraction for the first time on Nov 1, a Sunday, when the incident happened.

The Jurassic Mile stretch, which features dinosaur exhibits, is part of the 3.5km Changi Airport Connector running from East Coast Park to the airport. It opened last month.

Mr Chen, who has appeared in Mandarin dramas and films, including the popular Ah Boys To Men series and the award-winning Ilo Ilo, said they were taking photographs of their son at the Brontosaurus exhibit when the golf ball flew through the air towards them.

"The ball hit the wall opposite the exhibits and then bounced back before landing near the fencing, about five feet (1.5m) from my son," he said.

Mr Chen said another family was standing closer to the wall when the ball hit it.

"They were also shocked. They jumped up and shouted, then quickly ran off," he said.

After making sure his son was not injured, Mr Chen and his family also left the area in a hurry.

On Oct 22, a foreign domestic worker was hit by a golf ball that flew towards her from the adjacent Tanah Merah Country Club (TMCC).

Her employer later posted on Facebook that the family was walking along Zone J of the Jurassic Mile when their helper suddenly dropped to her knees and started crying.

The family then realised she had been hit by a golf ball and had suffered some bruising.

After the mishap, a spokesman for Changi Airport Group (CAG) said it was looking into "additional ways" such as putting up netting to "further minimise the risk of stray golf balls" entering the Jurassic Mile.

The TMCC also said it was working closely with the CAG to enhance safety measures of the path.

Safety netting was installed along parts of the Jurassic Mile on Oct 24.

According to the pictures taken by Mr Chen, there were safety nets along the Brontosaurus exhibit, where his son was almost hit.

He felt the safety netting, which looked to be about 3m to 4m high, was inadequate if the golf ball could still land on the path.

Mr Chen hoped that more can be done to protect visitors, such as making the nets higher or possibly building a shelter over the walking and cycling track to prevent any ball from landing inside.

He added that the stray golf balls are a concern as the Jurassic Mile attracts many families with young children.

"I read that someone had been hit recently... It is quite scary because you don't know when it will happen again.

"I play golf so I know how the ball can fly quite far and high before falling to the ground with some force," Mr Chen added.

"I don't think we will go again. I've seen golfers being hit by golf balls before and it can be quite bad."

In response to TNP's queries, a CAG spokesman said yesterday: "We are not able to comment on this specific case, but as part of planned safety enhancement measures, overhead netting was installed on Nov 3."

The spokesman was not able to provide more details on the overhead netting by press time.