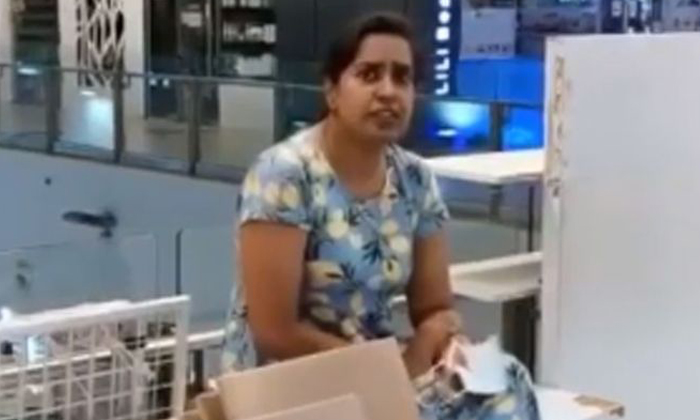 A woman who was caught on video insulting at least two men in Sun Plaza shopping mall after refusing to wear a mask was granted an absolute discharge by the court on Tuesday (July 14).

This means that Kasturi Govindasamy Retnamsamy, 40, will not be sentenced on the charges that she had pleaded guilty to earlier. These were one count each of harassment, using criminal force on a policewoman and an offence under the Covid-19 (Temporary Measures) Act.

On Tuesday, Deputy Public Prosecutor Stephanie Koh noted that Kasturi had already admitted to and been convicted of her offences.

But this was an exceptional case, where the offender has a psychiatric condition that contributed to the commission of the offences and she has already served more than two months in remand, the DPP said.

It would therefore not be in Kasturi's or the public interest to protract the matter, DPP Koh added.

Kasturi had also said in a previous hearing that she has "extreme rage" and "multiple personalities" issues.

Probation or a mandatory treatment order, whereby offenders undergo treatment for their mental condition in lieu of jail time, were not recommended for Kasturi.

She was also found to be unsuitable for a day reporting order, whereby offenders have to report to a centre for monitoring and counselling as well as undergo rehabilitation.

The reasons for her unsuitability were not disclosed in court .

Kasturi was spotted not wearing a mask while in Sun Plaza at around noon on April 29 this year. She was holding one in her hand instead.

Refusing to put it on when told to, she insulted mall staff and hurled vulgarities at a security officer. The incident was caught on video and the clip was widely shared.

Kasturi was at the mall again at around 2pm on May 7. As a condition of entry, she had to scan her NRIC to facilitate contact tracing.

Instead, she threw her NRIC onto the table and hurled vulgarities at the mall staff.

She was then asked to leave the premises but entered the mall even though her NRIC had not been scanned.

Kasturi later sat down on the floor on the third storey of the mall. When a security supervisor approached her, she told him that she was "exercising" before using an obscene word on him.

She was eventually arrested for verbally abusing the supervisor.

As a policewoman tried to handcuff her, she struggled and scratched the officer's right forearm.

On Tuesday, Kasturi told the court that she needed a "full report" stating that she had a mental condition, and requested to see a psychologist as well.

The court has made arrangements for her to voluntarily undergo further assessment at the Institute of Mental Health (IMH), with a request for IMH to explore psychological counselling for her if necessary.

For verbally abusing another person, an offender can be jailed for up to six months and fined up to $5,000.

Offenders convicted of using criminal force against a public servant can be jailed for up to four years and fined.