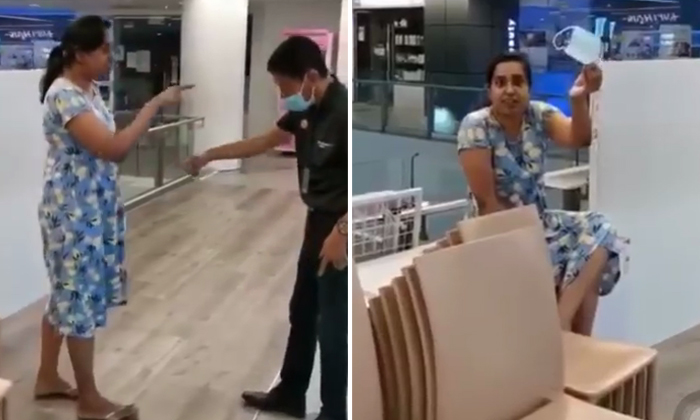 A 40-year-old Singaporean woman has been arrested for multiple offences after a heated dispute with the police and staff at Sun Plaza shopping mall on Thursday (May 7).

A video of the incident has been making the rounds on social media. In one post on Facebook, it has already garnered over 550,000 views and 10,000 shares.

In the video, the woman, who is holding a mask but not wearing it, can be heard telling a staff member at the mall, "If you want to talk, remove your mask and talk."

The woman also repeatedly holds up the mask that she is holding and says "this is a mask" but refuses to put it on properly.

She can be heard hurling various insults such as, "Are you all dumb? Or sophisticatedly stupid?" before adding, "Cheers to you all."

A security officer later asks the woman, "Why are you not wearing a mask?"

In response, she says, "Why are you?"

In a statement, the police said they received a request for assistance from a crowd management staff member deployed by Sun Plaza at around 2.10pm, about how the woman had been uncooperative and refused to wear her mask properly at the mall.

Preliminary investigations revealed that the crowd management employee had noticed that the woman was not wearing her mask properly when she entered the mall at around 2pm.

"Despite repeated requests made by the staff member to wear her mask properly, she refused to do so," said the police on Friday (May 8).

"The woman also insulted the staff member and hurled vulgarities at a security officer who came to assist.

"When police officers requested for her identity, the woman started peeling off the address sticker on her identity card.

The woman was subsequently arrested by the police officers and investigations are ongoing.

"She will also be investigated for not wearing her mask properly under the COVID-19 (Temporary Measures) (Control Order) Regulations 2020," added the police.

The woman had previously been issued a notice of composition of $300 for not wearing a mask at the same mall on April 29.

She will be charged in court on May 9.

The police advised members of the public to take circuit breaker measures seriously, adding: "We will not tolerate such blatant disregard of the law and wilful breaches of safe distancing measures. Let us all do our part to curb the spread of COVID-19."

Related Stories
‘Sovereign' woman is physiotherapist born and raised in Singapore, moved back here after 20 years in Australia
GrabFood deliveryman left with no income to support family after Playmade saga: 'Not the long waiting time that upset me'
Arrested: Woman who cursed and spat at KFC employee after being told to wait for her order
More About:
Covid-19
dispute
arrest