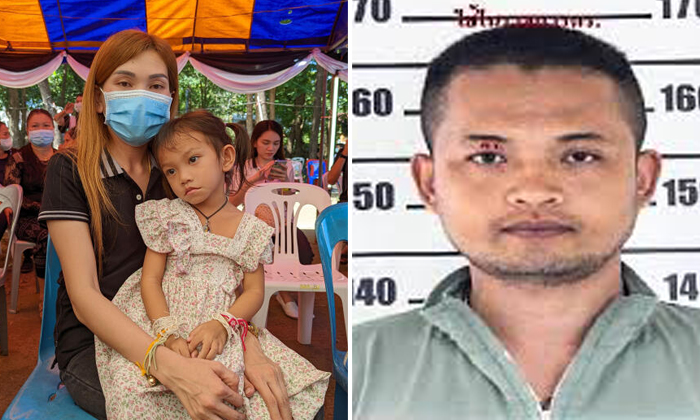 Fast asleep in the corner of the room, three-year-old Ammy escaped the notice of a gunman who had burst into her childcare centre and shot and stabbed 24 children and two of their teachers.

Her habit of wrapping herself in a blanket to sleep might have saved her life, said her mother, Ms Panomphat Srithong, 35, who was at work at an electronics firm in Bangkok 500km away when the attack occurred last Thursday.

"Someone told me that all the children had died," she said on Saturday as Ammy, wearing a religious amulet around her neck, sat quietly in her arms.

"But later I saw a video someone took of Ammy. It is a miracle she didn't die."

Mother and daughter had come to the Wat Si Uthai temple to join in the funeral rites for Ammy's dead classmates.

Ammy, whose given name is Pavenuch Sukonwong, had been attending the centre for about a year, and was the only child to escape unhurt in the attack.

Ms Panomphat is wary of triggering memories of that day by asking her daughter too much about it, but she said Ammy has some understanding of what happened.

"She knows that one of her friends, who is her best friend, has died," said Ms Panomphat, who also has a son aged 10.

Another child who survived was seriously injured and is in intensive care.

According to the BBC, Ammy was found awake, curled up next to the bodies of her classmates.

"She had no idea what was happening when she woke up," her 59-year-old grandfather Somsak Srithong was quoted saying.

"She thought her friends were still asleep. A police officer covered her face with a cloth and carried her away from all the blood."

Ammy has been evaluated by a mental health specialist who said that the girl appeared to be fine, and was still her bubbly self.

"She is still a happy girl," said Ms Panomphat.

Panya, who was facing drug-related charges, later turned the gun on himself after killing his wife and son at their home as well.

The victims have been accorded funeral rites, sponsored by King Maha Vajiralongkorn, at three temples and will be cremated on Tuesday.

Ms Panomphat believes that repeated trips to the temple for merit-making have paid off.

"I think it saved her from the shooting," she said.

In the wake of the tragedy, the Thai authorities dispatched mental health experts to counsel survivors and family members.