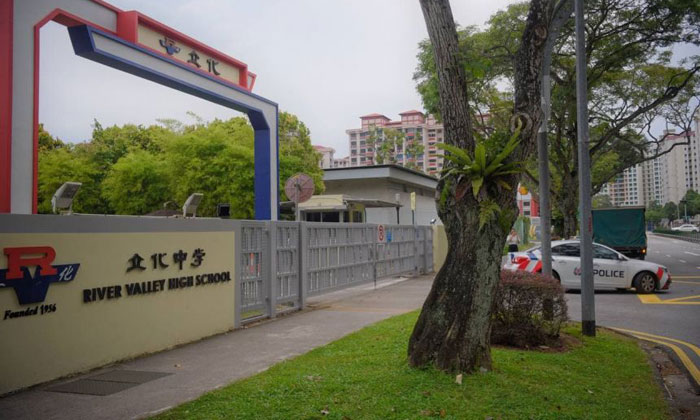 Police have arrested a 16-year-old Secondary 4 student of River Valley High School (RVHS) for suspected murder and seized an axe as evidence.

In the incident which happened on Monday (July 19), police said a 13-year-old Secondary 1 student of the school was found with multiple wounds in a school toilet at about 11.40am.

He was pronounced dead at the scene by a Singapore Civil Defence Force paramedic.

Preliminary investigations revealed that the two are not known to each other. Investigations into the motive for the assault are ongoing.

The 16-year-old will be charged on Tuesday with murder, with a view to have him remanded for psychiatric assessment.

"The police will conduct a thorough investigation and the full facts will be established in court," said the police.

"Pending the court proceedings, the police would like to urge members of the public to refrain from speculating on the case out of respect for the family of the deceased."

Past cases of campus attacks

An Indonesian final-year undergraduate, 21, fell four storeys to his death moments after he allegedly stabbed the supervisor of his final-year project in his office with a knife.

The alleged attack occurred on March 2, 2009 during a meeting to discuss the project with the professor. The student is said to have stabbed the professor from the back before falling from a bridge at the Nanyang Technological University (NTU) campus.

The student's death was ruled a suicide following a coroner's inquiry that spanned 10 days and involved more than 30 witnesses.

A then 17-year-old student slashed another teenager with a bread knife on the Institute of Technical Education (ITE) West campus on March 9, 2015 in an attack sparked by a dispute over the victim's girlfriend.

The lunchtime attack, which was caught on a video that was widely shared, left the victim with cuts on his left forearm, left fingers, upper back, and behind his left ear. The victim also suffered fractures in his forearm and two fingers.

The perpetrator was given reformative training following an appeal.