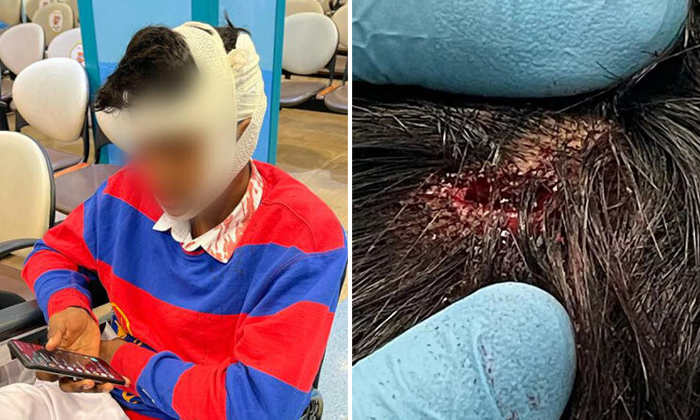 A secondary school student was allegedly brutally attacked by a schoolmate with a metal rod, leaving him with a gaping wound in his head.

When the victim was taken to hospital for his injuries, he was found to be positive for Covid-19.

On the day of the alleged attack, on Sept 27, he was dropped off at school by his elder sister at about 6.45am.

An hour later, the boy was allegedly attacked.

The police were called at about 7.45am, and the victim was taken to hospital conscious. He is assisting with police investigations.

"Another student, who allegedly used a pole to hit the student, was arrested for voluntarily causing hurt by dangerous weapon," said a police spokesman.

The spokesman declined to reveal the ages of the teens involved.

Responding to queries from The Straits Times, the Ministry of Education said the student who was injured has been discharged from hospital and the school is providing support to the students involved.

The sister of the victim said her brother tested positive for Covid-19 after he was swabbed at KK Women’s and Children’s Hospital, where he was receiving treatment for his injuries.

She said they are both quarantined together at home now, and that he is recovering well.

The teen suffered a wound on his scalp that doctors sealed shut using medical glue. This was removed from the teen’s head on Monday (Oct 4), a week after the alleged attack.

The victim's sister, who is in her 20s, said the alleged assailant had purportedly taken the metal rod to school.

She said both teens were not on good terms, and that the school did its best to protect her brother, keeping the two separated.

“I have no idea what’s up with children these days,” she said.

“I cannot imagine what would have happened if the hit was harder.”

She told ST how she was speechless when she received news about the incident over the phone that day.

“I could not move, I could not even say a word, I had only just dropped him off at school,” said the sister, who runs a beauty services business.

“And this wasn’t just any normal pole that was brought into the school, this was a metal pole. How did this even happen?”

She added that she is not seeking punishment for the alleged assailant, but wants to raise awareness about safety in schools, citing the recent incident at River Valley High School.

She suggested that bag checks be done, to prevent students from taking dangerous items to school.

Less than three months ago, a 13-year-old student at River Valley High School was killed in an incident that gripped the nation.

On July 19, a 16-year-old student from the same school allegedly attacked the boy, killing him in a school toilet.

The incident was discussed in Parliament, and it was revealed that an axe that was purchased online was involved in the attack.

The teen has been charged with murder, and his case is currently before the courts.