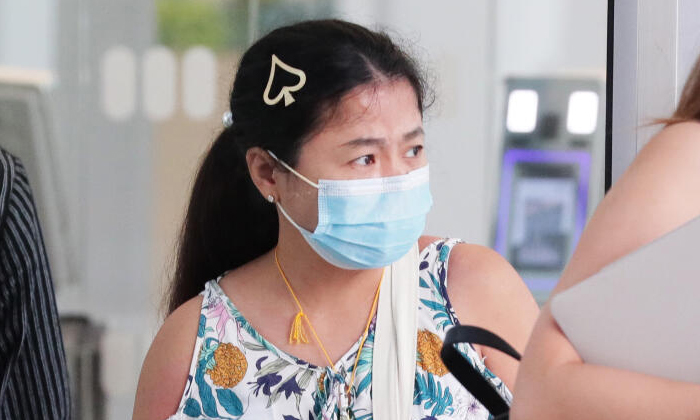 Frustrated with the number of chores she had on top of having to care for an elderly woman, a maid pushed her charge, causing the 85-year-old woman to fall and fracture her hip.

The 41-year-old maid from Myanmar had been employed by the family for about six years, and was tasked with handling the chores and caring for the victim.

The court heard that the elderly woman's legs were weak and she tended to fall.

On a day in August last year, the woman was walking to the kitchen slowly, and Kyu Kyu Aye wanted to hurry her along.

The maid pushed and pulled the woman a few times, and at some point pushed her behind her neck or head, causing the victim to fall.

The incident was captured by a security camera in the home.

The victim was taken to hospital and found to have sustained a fractured hip.

She said the victim was not capable of protecting herself, and that the maid knew her charge was a vulnerable person.

The APP added that Kyu Kyu Aye had also used force on the victim when she moved slowly on previous occasions, tapping and pushing her.

Defence lawyer Wilbur Lua said the maid was admittedly impatient, but that the victim's injury was only slightly more serious than a simple fracture.

He asked the court for sentence of between six and eight weeks' jail.

District Judge Chay Yuen Fatt said it was not just an unfortunate incident, and that the seriousness of the maid's actions should not be downplayed.

Kyu Kyu Aye could have been jailed for up to eight years and fined up to $20,000 for the offence.

Related Stories
Maid accused of assaulting baby and tampering with teats of feeding bottles claims trial
Maid threw toddler on sofa for 'messing up the house', caused her to hit her head on armrest
Maid who elbowed baby's face and stepped on his knee gets 9 months' jail
More About:
maid
injured
elderly
court