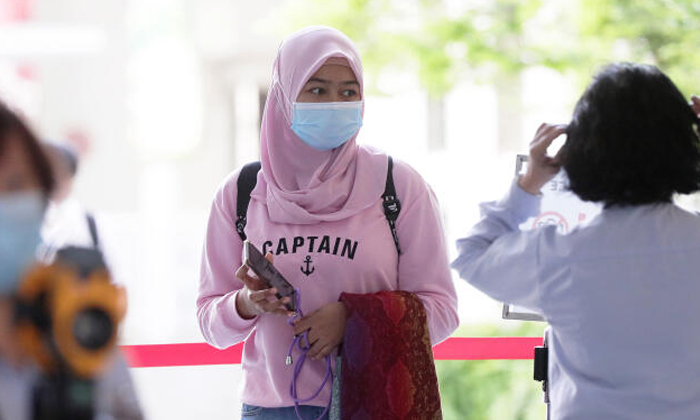 A maid who allegedly assaulted her employer's four-month-old infant and tampered with the teats of the girl's milk bottles claimed trial in a district court on Monday (Aug 16).

Nenti, a 25-year-old Indonesian woman who goes by only one name, is facing two counts of mischief and one count of voluntarily causing hurt to the baby.

She is said to have committed the offences in 2019.

The baby's identity cannot be revealed, under the Children and Young Persons Act.

Details about her parents also cannot be disclosed, to protect her identity.

The child's father, who took the stand on Monday, told the court that Nenti started working at his Punggol flat in July 2019.

The court heard that he lived there with his wife, daughter and their dog.

Nenti was the family's first maid. Her tasks included performing household chores and taking care of the baby.

The man testified that he was on his way home from work on Aug 7, 2019, when he received a call from his wife, saying she found scratch marks on their daughter's legs.

He told Judge Ng that his wife also sent him pictures of the baby's limbs.

The man said he checked on the baby after he reached home just after 6pm and saw the scratches. When confronted, Nenti denied causing them, the court heard.

The couple then took the baby to a paediatrician who said the baby could not have inflicted the injuries on herself.

The father said that according to the doctor, the baby could not have reached her own legs as she was just four months old at the time.

Suspecting that Nenti could be the one who inflicted the injuries, the father alerted the police at around 3am the next day.

Officers soon arrived at the flat and took the maid away. The man said there were no more contacts between him and her after that.

The couple later took their daughter to KK Women's and Children's Hospital and doctors there did not find any other injuries on the child.

The man testified that the child did not need to be warded and she was taken home.

Nenti was no longer working for the household when the man noticed that two teats of the baby's milk bottles appeared to have been enlarged.

He told Judge Ng that their openings were initially small and circular in shape. The two teats, however, appeared to have wider openings with slits.

The father said they did not seem to be manufacturing defects.

Instead, he felt they could have been caused by somebody who had cut them with a knife or a pair of scissors.

He also felt that Nenti could be the one who had tampered with the teats even though he had never caught her cutting them.

Three video clips taken from a camera in the kitchen of his home were played in court on Monday.

They showed Nenti handling separate parts of the baby's milk bottles including the teats.

After viewing them, the man said that she appeared to be squeezing the teats to check which ones had been tampered with. The trial continues.

For assault, an offender can be sentenced to jail of up to a year and a fine.

Related Stories
Maid who elbowed baby's face and stepped on his knee gets 9 months' jail
Babysitter who poisoned 2 babies under her care with medicines gets 7 years' jail
Man gets jail for throwing his 2-month-old baby at cop while trying to evade capture
More About:
maid
baby
assault
abuse
court