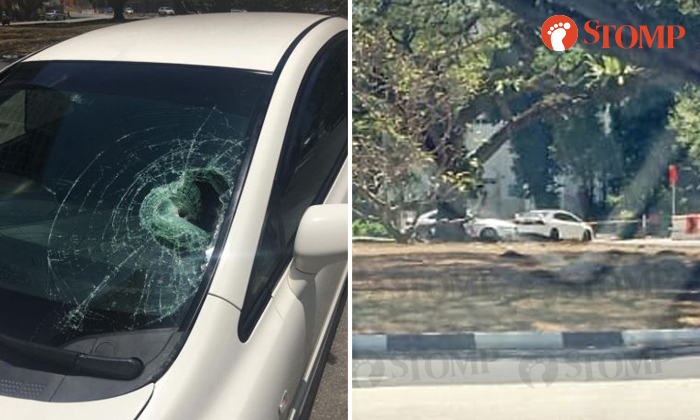 An 82-year-old pedestrian died in hospital after getting hit by a car at a roundabout in Marine Parade on Monday afternoon (March 18).

Responding to queries by Stomp, the police were alerted to the accident at the junction of Marine Parade Road and Amber Road at 12.30pm.

The elderly woman was unconscious when taken to Tan Tock Seng Hospital, where she subsequently succumbed to her injuries.

The car driver, a 29-year-old man, is currently assisting police with investigations.

Stomper Timothy shared photos of the scene that his friend took at around 2.20pm, showing police vehicles at the scene.

A white car can also be seen mounted on the kerb of the roundabout.

Timothy told Stomp: "My friend said the Honda had no car plates.

"Police were taking photos of the scene and there was a massive jam."

The accident occurred at a roundabout where Silversea Condominium is located.

According to The Straits Times, a Silversea resident had just exited the condominium and was heading to the bus stop when she witnessed the accident.

Sandra Zecasper, 38, said: "The car went onto the kerb of the roundabout, and hit the elderly woman and a tree. She flew really high up and then landed on her head."

According to Ms Zecasper, the woman was bleeding heavily from her nose and her mouth, and did not talk at all.

She said: "The driver took out his car plates once the accident happened, and did not seem injured."

Another Silversea resident, who declined to be named, told ST that she had been walking into the condominium when she heard a car "screaming around the roundabout".

She added: "Then I saw someone being flung, and I asked someone to watch my daughter while I ran over to the woman."

Residents in the condominium have been worried about the safety of the roundabout for months, reported ST.

This latest accident has prompted residents to write to the Land Transport Authority (LTA), asking for something to be done to improve the safety of the area, such as putting up railings or speed bumps.