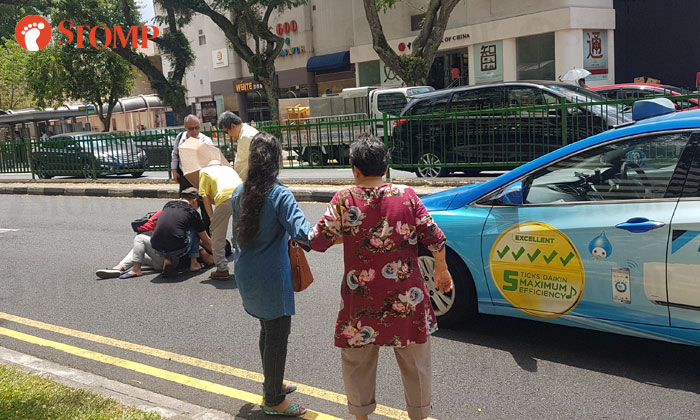 A man was taken to hospital after he was hit by a taxi while crossing the road at Lorong 4 Toa Payoh on Tuesday afternoon (Feb 26).

Stomper David alerted Stomp to the accident and shared photos taken at the scene.

According to David, the victim is a young man in his 20s or 30s.

"I was behind him when he got hit by the taxi," said David.

"He was walking along the pedestrian crossing just as the green man was flashing.

"The impact caused him to fly about one metre and his shoe to come off.

"It was left behind the taxi."

David told Stomp that passers-by rushed to help the man who was writhing in pain on the road.

"One uncle held an umbrella over him as they waited for an ambulance to arrive."

In response to a Stomp media query, the Singapore Civil Defence Force (SCDF) said it was alerted to the accident at about 2pm.

A person was taken to Tan Tock Seng Hospital by an SCDF ambulance, a spokesman said.